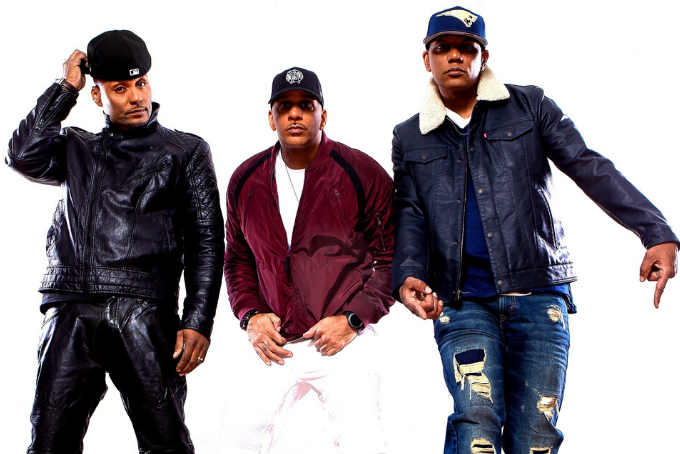 We recently had the opportunity to chat with The Funky Bunch, who you may remember as Marky Mark and The Funky Bunch. Their smash hit “Good Vibrations” is unforgettable, and it reached No. 1 on the Billboard Hot 100 in 1991.

Even though Marky Mark is now A-List Hollywood actor Mark Wahlberg, The Funky Bunch live on as a trio consisting of Hector Barros (AKA HB), Terry Yancey (DJ-T), and Scott Ross (DJ-T).

The trio recently released their new single, “Absolutely,” and toured over the summer. We chatted about the track, their plans for 2020, the reinvention of The Funky Bunch and more!

You released your new single “Absolutely,” featuring Sisqo, in July. Tell us a little bit about the track. Can we expect a music video for the song in the near future?

When we came up with “Absolutely,” we knew we needed to come out with a single that had a sound that would be familiar to the listeners from the “Good Vibration” days, but that would bring a bit more of an urban RnB side to it as well.

Scottie Gee came up with the idea to reach out to Sisqo to have him on the single, as it felt like the perfect fit to help see the vision come to life. There will be a video in the future, and as of this month, we did release a lyric video that can be found on our YouTube page.

This is the first single you have released in more than 20 years, and it’s the first song you’ve released without Marky Mark. Does this feel like a reinvention of The Funky Bunch? How have you guys changed or stayed the same?

We actually had attempted to do The Funky Bunch thing twice in the past, and at the time it just didn’t feel right. Timing is everything, and the time was now. It’s not a full re-invention, but we have changed in the sense that we are in the front now. It’s a chance for us to show people who The Funky Bunch is and show them what they haven’t seen before. Doing it this way without Mark feels right. It’s giving us a chance to work in a way that we have to prove ourselves as no one really knew us before.

Are you currently working on an EP or an album? Can we expect to hear new songs from you in the near future?

Absolutely – the first title explains there is much more to come and we are working on it. There will 100 percent be new music in the future. Stay tuned.

You toured over the summer at Hammer’s House Party with many other popular 90s artists. What was the vibe like on that tour, and how did it feel to be a part of it?

It was awesome. We were welcomed by everyone. Don’t forget all these artists have their “lead” singer, they are all frontliners. We came in and no one really knew what we were about to do without our lead. It was really cool to see that they were impressed that we had or own vibe with dancers and all. We make sure to leave that stage and know we put on a performance.

“Good Vibrations” was obviously a huge hit in the early 90s. What do you think it was about that song that resonated with so many people?

The title. It was just an overall good song that will be around for a long time. To this day, it is still on the radio, DJ’s play it in clubs, parties, boat cruises, etc. The song is still talked about. We actually know of people who got married to that song. It really is just a fun song that you can party to. Makes people wanna dance.

Can you describe your songwriting process? Do you usually write lyrics or a melody first, or does it depend on the song? Do you find it easier to write together or separately?

We write together very easily – come up with the harmony, the melody, etc. We work well together as a group. It’s a team effort.

Now that you have finished the Hammer’s House Party Tour, do you have any other upcoming shows or tours that fans can keep an eye out for?

Stay tuned for 2020 dates. We have lots for you. Keep up to date with us by texting FUNKYBUNCH to 484848 and you will get info on upcoming shows, dates, tours, etc.

We do have a book that will be coming out. You can pre-order on our website. It’s a chance for the fans to be a part of our history, past, present, and future. We actually had fans submit photos for the book from back in the day – a good trip down memory lane.

There is also a documentary in the works that will include 30 years of special moments with Mark, Rasta Phil, even Donnie Wahlberg and the New Kids on the Block Mania. We also have a reality show that is in the early stages. The Funky Bunch has a lot going on; it is going to be a wild 2020.