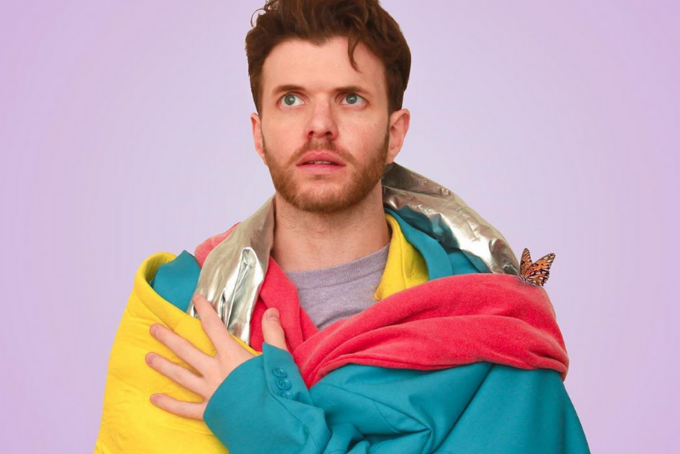 Glass Battles recently released his new album, Glitchcraft, and it definitely brings the dark pop vibes. Learn where Glass Battles gained some artistic inspiration, and get down to the bottom of what his newest single, “Septilizine,” means below!

Thanks so much for talking to us today! And just so our readers can get to know you a little more, if you had to describe your sound to someone who’s never heard a track from you, what would you say?

Thank you for talking to me today! I’d say, to put it simply, it’s spook pop — pop song construction with an alternative, dark spin to it.

What or who would you say are your artistic inspirations?

And congratulations on your new single “Septilizine.” It has a vibe that can put you in a trance, and it’s also the perfect sound for the season! What was your inspiration behind this track, and what was the writing process like?

It came from a misheard word from someone and sort of spun out into a little “if they don’t like what I bring to the table let them starve” story about toxic relationships and how we still chip away at things that might not be good for us.

How would you say this single differs from your previously-released songs from your upcoming album, Glitchcraft?

The odd part is I think they’re all from the same family. My upcoming album is centered around four identities that represent the themes and concepts of parts of and entire tracks: the tempter, the empath, the protector and the witch. This is just the first track centered around the witch, so it definitely has more of a quietly confident, hypnotic vibe to it.

So, we definitely googled the word “septilizine” and had zero luck on finding a definition. Could you tell us what the word means to you and how it came about to be the title of your third single off the album?

Weird story. A friend in skincare was referencing a protein-digesting enzyme known as subtilisin. It’s used in a lot of commercial products, one of them being a stain cutter in detergents. I thought the word was extremely cool, assumed that was how it was spelled and ran with the concept of cutting emotional stains out of your life.

The visuals for “Septilizine” are very different than I thought we would get from the vibe of the song, but it also works perfectly. Where did you gain inspiration for the visuals?

I aim to surprise. It actually started off differently as a very, very, very simple lyric video but grew into an introduction to the identities and a playful nod to a world of magic. Visually, I was inspired by Swedish Midsömmar and then my childhood with 8-bit video games took a hold of the wheel. It was also my first deep dive into directing, editing and animating, so it was a pretty great evolutionary process.

Can we plan on seeing the characters introduced in the video throughout the rest of the visuals for Glitchcraft?

Yes. They won’t be the same people playing them necessarily, but each of the identities is represented in their different incarnations for all of the visuals for the album. The story is definitely far from done.

What about the 8-bit video game feel the video gave off. Is this a theme throughout this era?

Absolutely. It’s building a world that straddles on somewhere between a nightmare and a daydream set in a simulated video game universe. I also wanted to present some more complex themes through something that’s a little more generationally digestible and ultimately have fun.

Well, this debut is Glitchcraft Vol. 1, so one can safely assume we’re not done quite yet. And I hear rumors of an actual video game coming out in the summer — definitely a lot more things that begin to expand on this world and Glass Battles’ adventures in it.

Watch the video for “Septilizine” below!