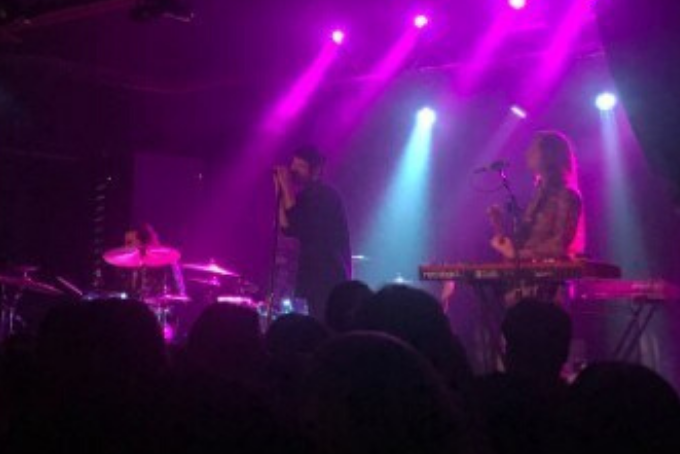 Despite the sudden cold weather in Boston, on a Thursday night, there was a line down the street at Brighton Music Hall. Fans were shivering both from excitement and the chilling air long before the doors even opened.

Once the doors were open, fans rushed inside to warm up, and immediately, an electric energy filled the venue. Fans were taking photos with their friends and mingling with strangers that they connected with. That connection was their love of rising pop star Charlotte Lawrence.

Charlotte’s opener was Goody Grace, a punk-pop crossover artist who is creating in the footsteps of iconic grunge artists like Blink-182. For an opener in an intimate venue like Brighton Music Hall, the goal is to connect with the headliner’s fans and recruit them into your own fanbase. Goody seemed to accomplish this, captivating the crowd that ranged from teens to adults. He even had some dedicated fans, who positioned themselves as close to the stage as possible so he could observe their dancing and fangirling.

Goody Grace performed a variety of songs, some upbeat and perfect for headbanging while others were raw and emotional. The crowd was the most hype when he played “Scumbag,” his newest song that just dropped a couple weeks ago. Before playing the song, he told the crowd how much Blink-182 inspired his music and how honored he was for the opportunity to collaborate with them. He then finished his set with a Blink-182 cover.

After the show, Goody hung out near the crowd and took pictures with ecstatic fans. We think it’s safe to say many people left the venue with a newfound respect and admiration for Goody Grace’s music.

Once the opener was finished, the crowd grew in numbers and in excited energy. When the lights went down and Charlotte Lawrence came on stage, Brighton Music Hall was full of delighted fans. We watched the show from the side of the stage, which meant an amazing view of the crowd’s faces.

They knew every single word to her songs. Charlotte interacted with them quite a bit, having conversations with specific people in the crowd and sharing funny anecdotes, like how she can never figure out how to work the microphone stands. It’s clear that Charlotte has a strong personal connection with her fans. Not only does she treat them like friends, but she’s also vulnerable in her music, which makes them feel like they know her.

The songs she played at the beginning of her set were energetic and entertaining. After about four songs, she stripped it down and played her most vulnerable song, “Everybody Loves You,” on the piano. The crowd was so engaged, hanging onto every lyric while Charlotte fearlessly performed something so personal yet relatable to the people in the audience. She then brought the pace back up and encouraged her fans to dance their hearts out. She played fan-favorites and had the crowd screaming the lyrics back to her, like a true superstar.

Last time Charlotte was in Boston, she played at Great Scott which has a capacity of under 250 people. On November 14, at Brighton Music Hall, Charlotte played to almost 500 people. Her career is rising, and as long as she keeps connecting with fans in the magical way we witnessed last night, she is destined to keep climbing.

This past Friday, indie-rock artist, Snail Mail returned to their home state to deliver a moving performance at the Fillmore Silver Spring. The sold out show packed the two story venue and the room buzzed with drinks and animated fans.  As the lights dimmed, vocalist and guitarist Lindsey Jordan entered the stage sporting a khaki…

Korn and Evanescence headed out on their first full tour together since 2007 and I had the pleasure of reliving my childhood at their Jones Beach date. Evanescence was one of the first bands to introduce me to alternative and rock music as a whole. I was fascinated with Amy Lee and, admittedly, a little…