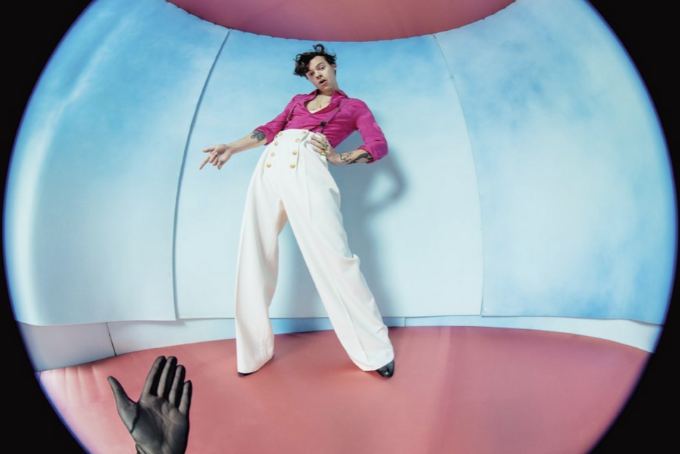 On Saturday night, Harry Styles made his SNL debut as both host and musical guest, and on top of that, the “Lights Up” crooner also debuted his latest single, “Watermelon Sugar,” which he released about an hour before the performance.

As the second single off of his upcoming sophomore LP, Fine Line — set to drop December 13 — “Watermelon Sugar” certainly did not disappoint, and we can’t complain about his debut performance of the track, either. Styles graced the late-night show’s stage in a red and pink outfit, exuding pure confidence and sex appeal, as he stole all our hearts and left us longing for that sweet (or should we say sexy) summer love he sang of.

Seriously, the performance was magic — and so is this song. Like “Lights Up,” Styles kept the lyricism short, simple and sweet like watermelon sugar (see what we did there?) He opened the track with the words, “Tastes like strawberries on a summer evenin’ // And it sounds just like a song // I want more berries and that summer feelin’ // It’s so wonderful and warm.” He later questions how he could ever go without a “watermelon sugar high.”

Now, if you’re wondering what the hell the phrase “watermelon sugar” actually means, our short answer to that is we have no idea. Although, we could venture a few guesses. According to the second definition on Urban Dictionary, it is a type of street heroin that originated in Southern Georgia in the late 90s, which would make sense since Styles describes it as a high. (Side note: we strongly suggest you scroll down to definition No. 4.)

Others think the phrase is in reference to a novel published in the 1960s, titled In Watermelon Sugar, which Styles’ former girlfriend, Camille Rowe, mentioned was her favorite book in an interview with Elle.

Regardless, the entire premise of the song is super sensual, and we aren’t complaining. In fact, it makes sense why Styles compared the track to his song “Kiwi” about a month ago, which by the way, was his subtle way of letting fans know of the song’s existence. You can imagine the immediate frenzy it put them — and us — in.

After declaring his “watermelon sugar high,” Styles jumps into verse No. 2, in which he sings, “Strawberries on a summer evenin’ // Baby, you’re the end of June // I want your belly and that summer feelin’ // Getting washed away in you.” At this point, we lost about any chill we had prior to listening to the tune.

And can we take a moment to talk about the song’s production? The sound keeps to the British-born artist’s tone stemming from his debut album — though like Fine Line‘s debut single, “Watermelon Sugar” brings the added element of something new and soulful, specifically with the use of the brass instruments coming in at the chorus and post-chorus. They had us breaking out into dance, much like Styles himself during his SNL performance.

Needless to say (but we’ll say it anyway), “Watermelon Sugar” is a pop-rock banger, and we’re dying to hear what else Mr. Styles has in store for us.