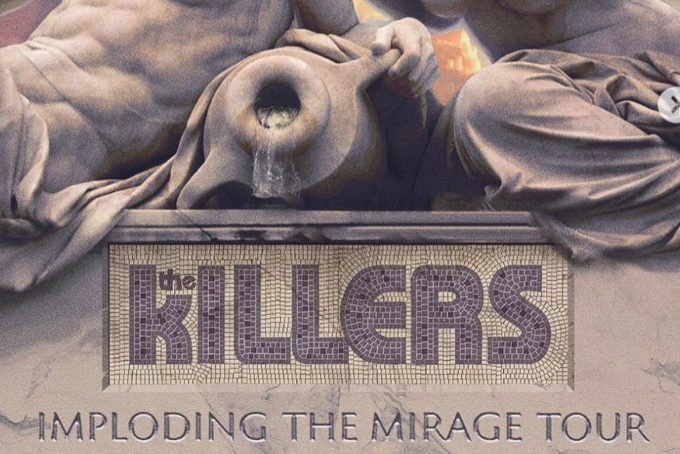 The Killers are back and ready to start off 2020 with a bang! On November 15, the alt-rock stars announced on Twitter that their next album, titled Imploding The Mirage, is coming out in spring 2020. The band hinted at more news coming soon, adding at the end of their post, “future musical teasing imminent.”

Introducing IMPLODING THE MIRAGE. Preorder the album to get access to pre-sale tickets for our UK & Ireland Tour at the link below. Future musical teasing imminent.https://t.co/ZRZj4sNMWa pic.twitter.com/ZDPp2l0RM2

Imploding The Mirage will follow the band’s 2017 release Wonderful Wonderful. The album’s lead single, “The Man,” became a massive hit for the group, reaching No.2 on Billboard‘s Alternative Songs Chart. The band’s most recent release was the single “Land of the Free,” a politically charged anthem for change.

In an interview with NME earlier this year, frontman Brandon Flowers said of the new album, “We’ve been in Utah doing it. That’s where I fell in love with music for the first time; so it’s interesting to be there again and hear some of that music with the geography matching the sensation. Some of that stuff is starting to resurface and a lot of that had to do with synthesizer music. It’s always been part of our DNA but it’s definitely creeping up.”

The band hasn’t announced the tracklist or anything about a potential single, but they possibly hinted at the album in a Twitter post back in October. The photo is of what appears to be possible track names.

Along with the album, the band also announced an upcoming U.K. and Ireland tour. The tour will take place in May and June of next year. Tickets will be going on sale on November 22 at 9 a.m. local time. The Killers will be joined by Blossoms, Sam Fender and Manic Street Preachers as opening acts, alternating throughout the nine dates.