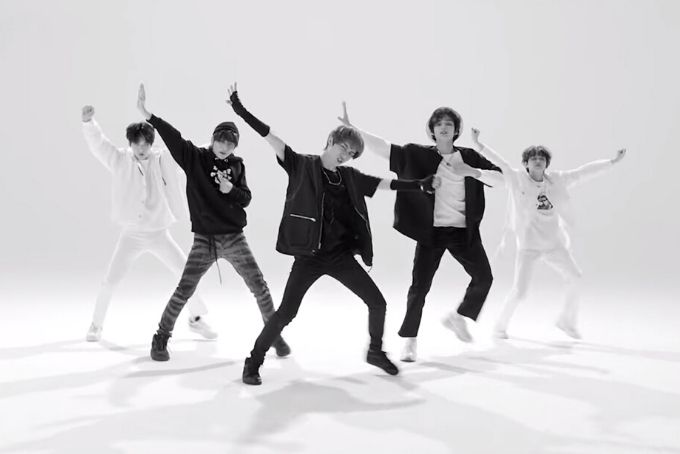 TXT are back with the music video for their song “Angel or Devil.” The song was originally released with last month’s album The Dream Chapter: Magic. This is TXT’s third music video from the album, following videos for “9 And Three Quarters (Run Away)” and “Magic Island.”

The Dream Chapter: Magic is TXT‘s second release, following their debut mini-album The Dream Chapter: Star released in March. TXT, also known as TOMORROW X TOGETHER, made their debut earlier this year in March under Big Hit Entertainment. The group’s made up of members Yeonjun, Soobin, Beomgyu, Taehyun and Hueningkai.

The song itself is playful and upbeat with nods to tropical music amongst its percussive focus. Each member’s vocals get a chance to shine as they debate whether they should be an angel or a devil in love. The boys even throw in a shoutout to labelmates BTS with a reference to their hit “Boy In Luv.”

The video focuses mostly on the quintet’s sleek and high-energy choreography. The video transitions between a few different sets, from a completely white set to a warehouse. The sets play with the contrast between light and dark, tying back to the theme of the track. Colorful graphics appear throughout the sequences, giving the boys wings, devil horns and halos amongst other additions to their movements.

The coolest sequence in the video comes in around the halfway mark, with the boys in a darkened warehouse, surrounded by tires. The lights switch on and off, revealing the boys in different positions, while neon graphics accent them. The graphics linger just for a second, giving the effect of flash going off of a camera. It’s an interesting trick with lighting, graphics and camera work, making it the stand-out moment of the video.