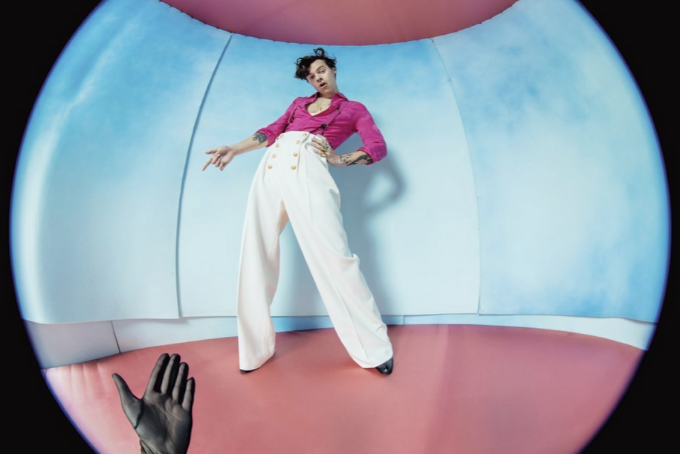 Only a few days before Harry Styles’ “Lights Up” dropped in a surprise midnight release, the stans were on it. Across major cities, posters asking “Do You Know Who You Are?” with no branding by the Columbia Records logo popped up. Never one to miss a beat, the dedicated fans immediately connected it to Styles, and many were already eagerly awaiting the new track when he dropped it as a “surprise” that Friday.

Two months (and one even more mysterious marketing campaign) later, and the fans finally have access to the full follow-up solo endeavor from Styles, Fine Line. Described in Rolling Stone‘s profile as his “toughest, most soulful songs,” the album certainly sheds a new light on Styles and begs several questions about identity and self-presentation.

This is most clearly seen on songs like “Falling,” the record’s first ballad. Earlier this week, Styles noted, “I thought I was being so honest [on the first album], just because there’s one line about having a wank.”

“Falling” swings entirely in the opposite direction, with its central question being: “What am I now? // What if I’m someone I don’t want around?” Similarly, lead single “Lights Up” calls on listeners, closing with that central question, “Do you know who you are?” After almost three minutes of Styles singing about “stepping into the light,” it is clear he is still learning, but he also makes it known that he is finally ready to be more open with what is in his heart.

Even though Fine Line centers on questions of identity, Styles certainly seems to have sorted out how to present his voice. While his self-titled debut had quite a few overtly sexual, leering lyrics (“Couldn’t take you home to mother in a skirt that short,” and “Hard candy dripping on me ’til my feet are wet,” spring to mind), Fine Line has a stronger sense of self. His debut was clearly attempting to match itself to the Rock & Roll masters of yore by but Fine Line shows he can still showcase his influences without compromising his own personal sound.

Fine Line explores its musical influences by getting a bit trippy. Styles openly admits he experimented with psychedelic drugs in the creation of this new album, and there are certainly hints of this on numbers like “She” and “Sunflower, Vol. 6.” “She” even ends with a two-minute Pink Floyd-style guitar riff that Styles’ guitarist and writing partner, Mitch Rowland promptly forgot in the morning and had to relearn from the recorded track. Others, like “Canyon Moon” and “Cherry” are more folksy, inspired by tracks from Joni Mitchell and Crosby, Stills & Nash. The former is even the personal favorite of one Stevie Nicks, who’s taken Styles in under her wing over the past several years.

Despite there being a clear theme among the album, some tracks certainly stand out for doing something different, even on an album full of different. “Golden” and “Treat People With Kindness” were clearly written by a star with a successful solo arena tour under his belt. The songs were written to be performed, the former as an opener, ready to build up the crowd’s anticipation and delight, as much as it does as it introduces its audience to the album.

“Treat People With Kindness” takes an alternative route, and is one of the most aesthetically different tracks on Fine Line. Mixing influences from Queen and 1960s Motown, it’s totally unique and doesn’t even feature Styles himself on the chorus. But as the song builds in the final third, it’s easy to imagine Styles quite literally flailing across the stage and engaging the crowd in a passionate and positive sing-along. With his careful crafting of his stage experience in mind, the song makes much more sense on the album despite its unique style, and it will surely fit seamlessly into the new setlist.

While Styles spends the vast majority of the 47-minute record considering himself and his identity, he still comes to no firm conclusions. Like so many things about him, he’s quite reserved about confirming well, anything. But for all his waffling and vague non-answers, Harry is clear on one thing: he wants listeners to take what they want from his music. For a man so wrapped in scrutiny, his fans will accept any piece of him he will offer, and Fine Line is certainly an excellent addition.