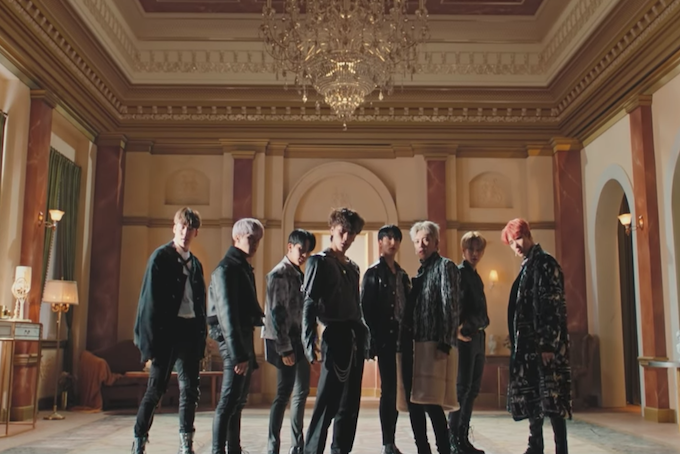 K-pop group ATEEZ is back with their Treasure Epilogue: Action to Answer EP. This is the fifth and final installment as part of their Treasure album series. “Answer” follows last October’s Treasure EP Fin: All to Action — their first full-length album. The boy band recently celebrated their one-year anniversary and have become one of K-pop’s most prominent rising acts.

“Let’s make a toast like a thunder // Fill in everything // As much as it overflows,” San hauntingly sings as he’s seen dancing on a banquet table. He is later joined by Yunho‘s powerful vocals and group choreography.

Perhaps the most significant visual is when the group comes full circle and is reunited with their previous selves from the “HALA HALA (Hearts Awakened, Live Alive)” music video.

This moment can be seen as the triumphant conclusion to their emotional journey as the group finds their “answer” and is ultimately ready to step towards a brighter future.

“Answer” is accompanied by four new tracks, for which rappers Mingi and Hongjoong are credited as lyricists.

“Horizon” is another intense dance track that details the slight insecurities they may have as they begin their next journey, but they are confident enough to map out the foreseeable future.

It’s refreshing to see the band show restraint as well as a softer side of themselves with the sweet ballad, “Star 1117.”

The final song is the incredibly addicting “Precious.” Lyrically, the group alludes to the end of their journey and their discovery of a precious treasure.

On the instrumental outro track, “Outro: Long Journey,” the octet wraps things up by saying they have finally found their treasure.

Although the rising stars finally found their answer or treasure, this isn’t the end by a long shot. With the release of five projects in a little over a year, they didn’t just come to play — they came to win. So let’s toast to the new year by looking forward to another journey with ATEEZ.