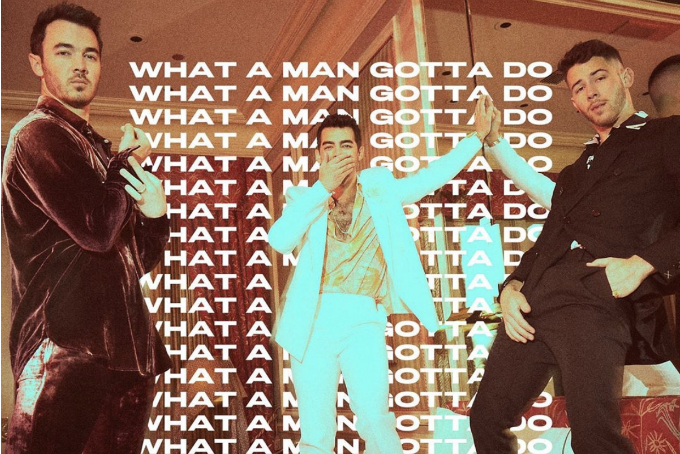 Why would the Jonas Brothers use models for their music videos when all three of them have such beautiful wives? The brothers from New Jersey are starting off 2020 strong with another bop and an even better music video.

“What a Man Gotta Do” is their first (non-Christmas) single since their 2019 comeback album, Happiness Begins. After a year of touring, hit singles and even a Grammy nomination, it looks like the brothers are here to stay. And clearly, it did not take them long to drop more music.

“What a Man Gotta Do” is a fun, catchy love song, and in the tune’s accompanying music video, the JoBros and their wives recreate scenes from some pretty iconic romantic comedies.

The lyrics of the single may be simple, but the boys don’t have to say much to illustrate just how lucky they are to have all found solid relationships. There is nothing like that feeling of being “your last good night and first good day.” With a fun drum beat, “What a Man Gotta Do” makes it almost impossible not to dance to. There are a lot of clapping beats in the song, which blend well with the strings and Nick’s falsetto, leaving listeners with a ton of positive vibes.

Now, if you haven’t seen the music video, you are certainly missing out. The dance vibe of the music only carries over to Nick in just a button-down and socks. He recreates the iconic Risky Business scene with his wife, Priyanka, while trying not to laugh. Then, we have Joe and Sophie Turner recreating the iconic big dance scene from Grease. Joe and Sophie make the perfect Sandy and Danny (even when Sophie comes out in all black as rebel Sandy). And lastly, Kevin and wife, Danielle, make a modern version of Say Anything. When Kevin’s boombox breaks outside Danielle’s window, he plays her some Jonas Brothers tunes on his iPhone. We even get a cameo from Kevin and Danielle’s daughters at the end.

It’s hard not to love “What a Man Gotta Do” with its infectious energy. Plus, the Jonas Brothers and, as their wives like to call themselves, the Jonas Sisters, look like they had so much fun shooting together. We can only hope this single will lead to more videos down the road that keep us smiling.

We love that the Jonas Brothers returned only to take over the pop-rock world once again. We hope to dance to this absolute bop with them soon.