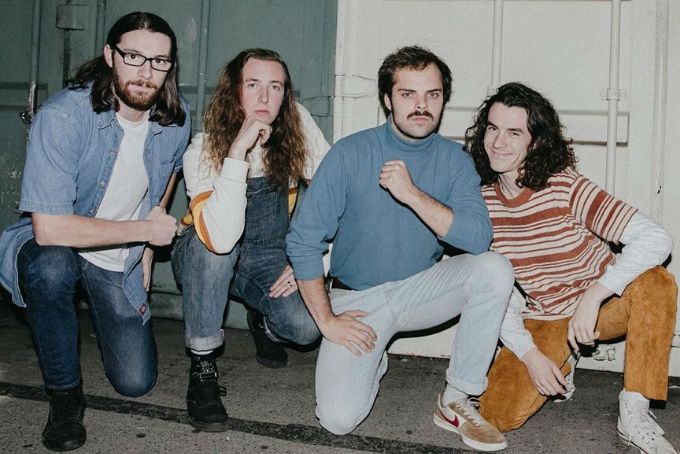 Newcoming indie-pop band Peach Pit just released their single “Shampoo Bottles,” which is accompanied by a creative, melancholy music video. The soft, nostalgic single puts a sad-pop spin on the band’s style, as it narrates the feelings of denial towards a recent breakup. The Vancouver-native band plans to release their sophomore album this spring and will feature recently released singles “Shampoo Bottles” and “Feelin’ Low.”

What’s so intriguing and catchy about “Shampoo Bottles” is the detailed, descriptive lyrics centered around boring, everyday items that once belonged to a love interest, which now haunt their ex’s home. Singer Neil Smith opens the first verse, admitting, “I’ve been leaving your shampoo bottles // Over in the corner there // Sitting empty on the bathtub rail // Wishing they could wash your hair.” He mentions in the second verse how he can’t resist keeping his home decorated with his ex’s memorabilia. He sings, “It is seemingly worsened everyday // All this shit of yours around my house // If I could’ve had it any other way // Then by now I would’ve chucked it out // But it seems to wanna stick around.” Although these items only cause more harm to his mental health, he can’t help but want to bask in the pain as a result of reminiscing.

Peach Pit’s quirky music video, directed by Lester Lyons-Hookham, takes the meaning of the song to new places, literally. The video showcases the perspective of each of the four band members as they navigate and cope with some depressing situations in their own individual ways. Neil’s found sitting in a bathtub, smelling his ex’s old shampoo; bassist Peter Wilton‘s seen mourning after a late pet; guitarist Christopher Vanderkooy contemplates his self-worth after being left by his girlfriend for someone else; and drummer Mikey Pascuzzi endures a post-breakup mental breakdown, leading him to bleach his hair blonde. Through the use of dark humor and sarcasm, Peach Pit somehow manages to entertain us while making us think about our own vices and insecurities.

🧼Our new single “Shampoo Bottles” is being released everywhere tomorrow!!! Don’t fall asleep in the bath and drown and miss it!!!🧼

One witty, notable moment in the video occurs as the band sings the chorus in the middle of a parking lot, surrounded by a bunch of red Toyota Corollas. In the third verse of the song, Neil mentions that everywhere he goes he’s reminded of his ex. Even while driving around town, he speculates out of paranoia that one specific car parked out on the street could belong to her. He admits, “I’ve been seeing that red Corolla // Parked out on the corner there // As I’m passing it every other day // I look in to see if this one’s yours // But the shape it’s in is giving it away // Yours is dented up and down the doors // Never wanted to see it more. ” Here, the band makes the point that while going through a breakup, nearly everything becomes romanticized in your mind. From missing the lingering scent of an ex to wishing you could ride around in their crummy car just one more time, it becomes apparent that you’re just not quite ready to let go.

Peach Pit’s new song shows us that there are many different ways to cope with hard times, and that’s perfectly normal. In fact, sometimes we end up doing some “not-so-normal” things in a desperate effort to pick ourselves up and move on. Moral of the story: if you’re ever feeling a bit in your feelings, Peach Pit will always be there to comfort you in the most entertaining way possible.