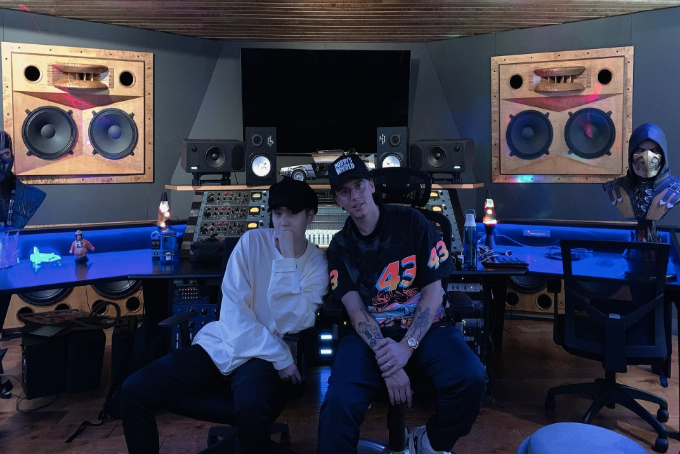 Looks like we have another BTS collaboration on the way! On January 30, BTS member and rapper Suga shared a photo of him and rapper Logic in a studio with the caption: “A good time!” Logic also shared the photo on his Instagram, captioning it: “BTS with the homie Suga.”

It is currently unknown when the two artists got together, but it’s a safe bet that it happened while BTS was in Los Angeles for Grammys weekend, as well as a few other television appearances. Visionary Music Group, Logic’s management, thanked Suga for stopping by in a comment on the photo.

The studio is actually Logic’s home studio, featured in the rapper’s house tour in his YouTube video BobbysWorld Ep 1 as confirmed by Koreaboo.

While we’re not sure what the two rappers are working on and when it will be released, there will still be plenty coming from both artists. Suga is currently prepping for the release of BTS’ new album, Map of the Soul: 7 as well as an upcoming tour. Logic most recently dropped his single “OCD” with R&B singer Dwn2earth.

Logic’s most recent album, 2019’s Confessions of a Dangerous Mind, was also a collaboration-driven effort. The album featured Eminem, Will Smith, Big Sean, YBN Cordae, amongst others.

It’ll definitely be interesting to hear what the two artists are working on, especially considering both often confront their inner demons and seek inner peace through their music. Suga’s last solo effort, 2016’s mixtape Agust D, revealed a lot about the rapper, including his struggles with depression and his conflicts with fame. Given the similarities, some fans are even speculating that this collaboration could mark the return of Suga’s solo persona.

Needless to say, the BTS ARMY is excited for new music, and they definitely let their excitement be known all over Twitter.

Yoooo If this happens though. Expect some powerful deep impacting lyrics/music out of these 2. 👏👏💜💜😍😍 pic.twitter.com/n4s3lQxOZI

the amount of talent in one picture WOW pic.twitter.com/mupBdmaTSk

Are you excited to see what Suga and Logic are working on? Let us know!