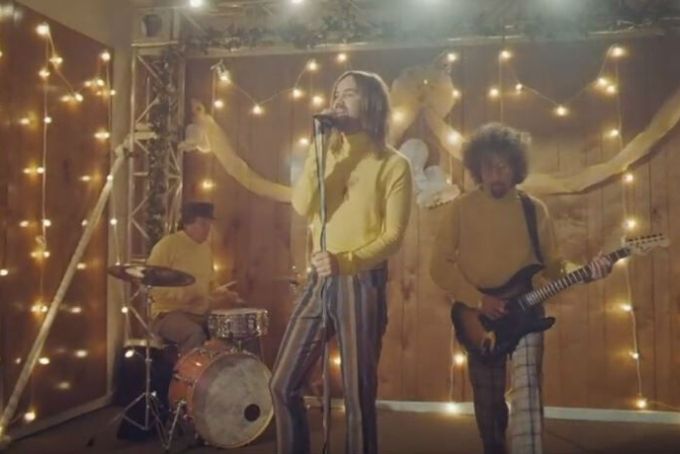 As Tame Impala gears up for their upcoming album, The Slow Rush, the band has released its final single, “Lost In Yesterday.” Based on first impression, “Lost In Yesterday” appears to be another groovy track all about staying positive and accepting your past. However, after the release of the official music video, we’ve realized a greater, deeper meaning behind “Lost In Yesterday.”

The music video rewinds all the way back to the 1970s and takes place at a wedding reception. The opening scene reveals that the wedding party is rather small and awkward. As the camera pans the room, we notice that there’s a lot of tension building up between irritable guests… even the pregnant bride looks like she doesn’t want to be there! The budget for this wedding was minimal, which we can see based on the lack of decor, cheap catering options and the tiny band that plays onstage, only consisting of Tame Impala’s very own Kevin Parker, accompanied by a drummer upstage. This is the first time in years that Kevin has made a formal appearance within his own music videos and we’re loving it!

As time passes throughout the video, we’re presented with new and improved flashbacks, literally. As we enter the next scene, the party looks much more put together, the guests are more engaged in their surroundings, the bride’s no longer pregnant and the couple looks very excited as they cut into their wedding cake. Long story short, Kevin’s dropping major hints that everything’s not always how it’s remembered. He explains this best in the first verse of the song, “eventually terrible memories turn into great ones.” When details and emotions fade, we often get lost in nostalgia and forget how reality actually played out in our past. Hence, we’re all a little “lost in yesterday.”

The last scene of the video makes a major visual upgrade. The wedding party looks just like a dreamy fantasy that has been romanticized into a picture-perfect day. A positive energy sweeps the room, the bride and groom look completely in love, the guests become emotional for them and Kevin’s band has doubled in size to give an elaborate performance. This romantic little utopia’s violently awakened as the pregnant bride from the very first scene storms in with a cake knife. To end the scene, she begins destroying the party as everyone around her is taken back with shock.

The drama of this event acts as a huge metaphor for nostalgia — everything always seems like it was picture perfect until a bad memory resurfaces, forcing you to recall the true reality of old times. This strongly relates to the pre-chorus, when Kevin sings, “Cause if they call you, embrace them // If they stall you, erase them.” Oftentimes, we only choose to remember the good things that “call us,” encouraging us to erase any memory that didn’t bring us joy.

Kevin Parker has one of the most creative minds in the industry and we cannot wait to watch him dive deeper into the controversial concepts of space and time on Tame Impala’s new album The Slow Rush, set to release on February 14. In the meantime, grab your tickets now to catch Tame Impala on tour this year!