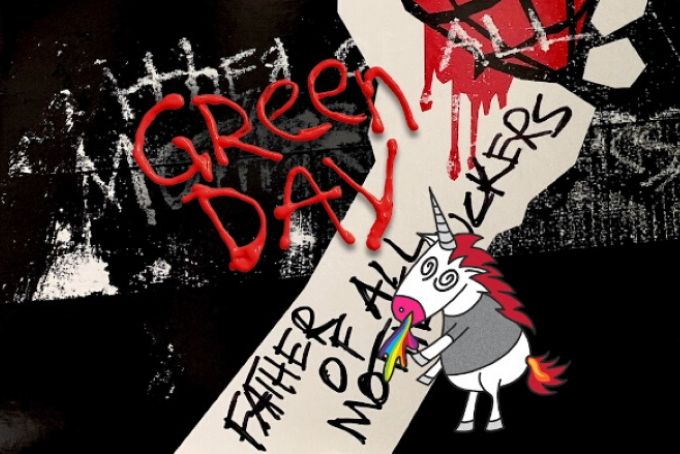 There are many punk things about the new Green Day album.

There’s just really nothing punk about the music. And while that complaint has been made about Green Day since before their seminal Dookie, this time it’s justified.

To put it bluntly, Father of All… is all bark and no bite. All aesthetic and show, but no substance. Sure, it looks like a Green Day album and it looks like a punk album, but once you get into it, it’s pretty… well… soft.

It’s just that none of them are particularly… memorable. Or really sound like Green Day.

Honestly, the most notable thing about the album (aside from the fact that it is painfully mediocre) is that this is the first album in literal decades that Green Day has shied away from political commentary. And if songs like “I Was a Teenage Teenager” are indicative of anything, maybe they should stick to the political commentary.

When Father of All… is good, it’s definitely good. The title track “Father of All…” and “Fire, Ready, Aim” are both fun, mosh pit bangers that’ll easily get a crowd going — but after that the album quickly loses steam and is, quite frankly, bloated with semi-ballads that don’t need to be there — pretty depressing, considering that the whole thing clocks in at under 30 minutes. Maybe our East Bay trio is getting old.

Speaking of “old,” there’s something to be said for the obvious rockabilly influence that shows up in songs like “I Was a Teenage Teenager,” “Stab You in the Heart” and the band’s new leopard-print-and-shiny-suit aesthetic. It’s not exactly what we want from Green Day, but it’s not bad.

Aside from the first two tracks, “Sugar Youth” is another standout with certain elements harkening back to Dookie era Green Day. But even still, “Sugar Youth” sounds more like a young band that’s trying to imitate Green Day, instead of a song written by the band itself.

In fact, the album is so hollow, most Green Day fans are of the conspiracy that this album was phoned in as the band’s last major label obligation — and that their next record will be a “real” record — one that the trio actually cares about.

Of course, aside from the album being lackluster, there isn’t much to back that theory and we’ll have to wait for the next release to see what the truth really is.