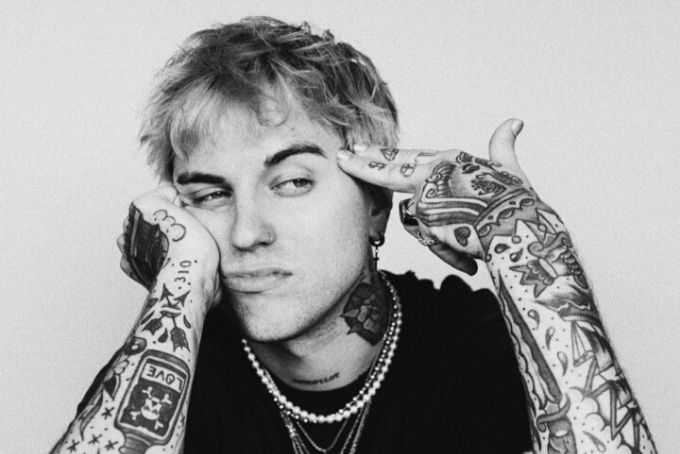 Who the hell is Canadian artist JUTES?

To be perfectly honest, even he doesn’t really know.

A self-described “New Nostalgia” singer, JUTES lives in a lot of intersections. He’s a punk. He’s a rapper. He was raised on heavy metal. He loves Kid Cudi. He’s worked with legends like John Feldmann and Travis Barker, and he hasn’t even come out with his first major label release yet.

If you were to listen to his newest single, “Everyone Knows,” you’d probably mistake him for a typical male pop singer — R&B-influenced, pseudo-sensitive and heartbroken. But JUTES isn’t typical and he isn’t interested in being labeled, really. He’s just interested in making good art and telling his truth.

Maybe it’s a boring question, but I love hearing from the artist directly — tell me a little bit more about your newest single “Everyone Knows” and what it’s about.

Me and my good friend Andrew Luce were kicking it at his place and he was showing me a song with this cool garage rock sounding hook. I loved the vibe and said, “Let’s make some shit like this.” The song evolved and leveled up many times since its inception and now what we have is something that doesn’t really sound like one specific thing or genre and I like that. This was my most carefree song on the project. I often kill myself over lyrics but this one I kind of just free-styled the chorus and was like, “Damn, this feels good; let’s just rock out and not overthink.” I wrote it about an ex-girl who basically had me super lost in the sauce and ended up driving me nuts. Everyone could see she sucked except me. Typical.

“Everyone Knows” is the lead-in to your upcoming EP. What made you decide that this was the single to lead with?

It’s actually the second single. “Sideshow” was the lead single. I had a bunch of content surrounding that song get completely botched but that’s neither here nor there, haha. “Everyone Knows” was a sleeper to be honest. I always loved it but thought it might be a little too off-kilter to be a single, but so many people kept saying that song just stuck with them. It’s also my favorite song to sing on the project so I would not mind it getting a little extra shine.

Since it’s my job to try and label you as a journalist, I’d say you’re somewhere between a rapper, pop-punk singer-songwriter and an R&B singer. But if we’re being perfectly frank, nobody cares what I think. How would you describe your sound?

This is always the most difficult question for me. It’s also such a grey area right now because there are people who have been following me from my rapping days who can’t let go of rap JUTES. But if you went through all my releases right now, you would label me as more of an R&B singer. Then if you heard the EP you would say, “Oh, he’s alternative rock/pop punk/trap.” If I’m being short I usually just say alt rock/pop punk. But that is leaving out a lot that I do. The genre question is not always that simple. I’ll make a new one up. New Nostalgia.

Speaking of genres and sounds — you’ve recently been in the studio with some punk legends like ‪John Feldmann‬ (Goldfinger) and ‪Travis Barker (‪Blink-182‬). What was the inspiration to work with them?

This was a dream come true. They say don’t meet your heroes, but I am so grateful I did. These dudes are as cool as you’d hope they would be in your head. They made me feel like a rock star in the studio. We made a handful of crazy songs that I still listen to and think “as if.” Fun fact: Feldy asked if I wanted to meditate in his living room before we wrote a song and I said, “Yeah, sure.” He told me, “You might want to cry; don’t hold it in, just let it out — there’s no judgement here.” And I laughed and thought there’s no version where I cry in John Feldmann’s living room right now. Sure enough, halfway through the meditation I started crying uncontrollably. Then we went and wrote a fire-ass song in his studio. Definitely a moment I’ll never forget.

Since we’re talking about other artists — let’s talk about your influences. What artists made you who you are today?

I was raised on heavy metal by my dad, who was a drummer in a rock band. Lots of stuff from the ’80s. Motley Crue, etc. The first album I bought was Blood Sugar Sex Magik by the Red Hot Chili Peppers. They’re still probably my favorite band to date. But at a young age, I fell in love with hip-hop after I bought the Stankonia album by Outkast. The hip-hop phase never died but through my friends at school I got into pop-punk and alt-rock music. Third Eye Blind being one of my all-time favorite bands still. And I’ve also always been incredibly inspired by Kid Cudi. He got me through a lot of tough times.

As someone who went from small town to big city, I can appreciate that the transition between the two can come with some culture shock. How did you handle the move from a farm in Canada to Los Angeles? And did that influence what we’ll hear in your EP?

Well I actually moved from a farm in Kars, Ontario, which is on the outskirts of Ottawa, to Toronto when I finished high school. I loved my friends to death, but I knew I couldn’t stay in my small country town. I always felt like a bit of a black sheep living in a simple farm town with these far-fetched, unrealistic dreams. Moving to Toronto without knowing a soul was definitely a bit scary, but that made the transition to LA not as crazy. Also I had lots of friends in LA from Instagram before I even moved there so it wasn’t as lonely as Toronto was at first. LA is a very crazy place though. I definitely wrote about things I was going through when I first moved to LA. The project is heavily influenced by the relationships I found myself in.

Speaking of transitions, you’ve only recently signed to Capitol Records (congratulations, by the way!) — what differences have you noticed between indie life and big label life?

When I moved to LA, I was living on my homie Tarro’s couch for a little while, so to sign a deal a year after moving there was the validation hit of the century for me. It’s been super cool to have all these people involved in my project helping out in different ways. I started this alone in my bedroom so you can imagine it’s tough to let anyone else in, but everyone at Capitol has been crazy cool about letting me have complete creative control.

And of course, my favorite question to ask all artists — why should the world care about JUTES?