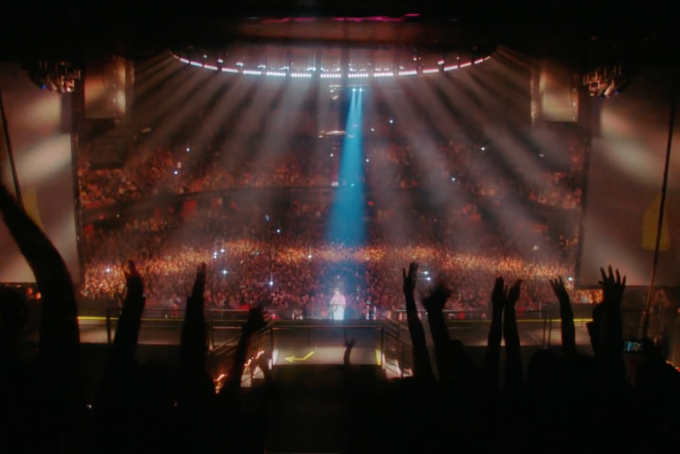 The singer-songwriter’s performance at The Forum in Inglewood, California, on December 13 was chronicled for the movie. Footage of Styles performing the three singles from Fine Line, “Watermelon Sugar,” “Adore You,” and “Lights Up” are interwoven with clips of him arriving at the venue in a vintage yellow sports car and preparing for the show backstage.

Perhaps most importantly, several fans were interviewed while waiting to go inside the concert. The clips highlight the personal connection that Styles’ fans have to the singer. Several exclaim that he has gotten them through difficult periods in their life with tears in their eyes. Many traveled from far distances to see the one-night-only performance.

One fan highlighted that Styles is one of the only artists who “treats other people with kindness and not many spread that [message].” Another said, “Harry’s all for the good [in the world].” Another female fan explained that she has “never felt more comfortable,” and she thinks “that goes for a lot of people here. We’re all here to see one person that makes us feel that way,” implying that Styles has successfully created a safe space for fans to fully be themselves at his shows.

The “Adore You” singer has seen success with his sophomore album, Fine Line. Since its release on December 13 (the same day as the performance in Inglewood), the album has not left the top 20 of the Billboard 200. In its first week, the album sold 478,000 units, of which 393,000 were pure sales. It marked the biggest pop album debut for a male artist in four years. It also became only the second album of 2019 to remain at No. 1 for two weeks in a row (the first being Ed Sheeran‘s No. 6 Collaborations Project). It remained in the top 10 of the Billboard 200 for seven weeks in a row and only slipped to No. 13 in the last week.

Styles will embark on the LOVE ON TOUR around the world in support of Fine Line beginning in April this year. Tickets to all dates are on sale now.

You can watch Fine Line Live at The Forum BTS below.