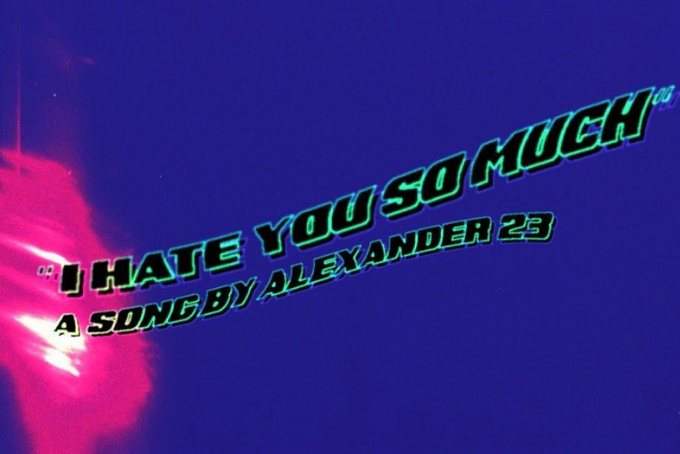 Newcomer Alexander 23 has been rapidly climbing the ranks since the release of his first single, 2019’s “Dirty AF1s.” His debut EP I’m Sorry I Love You followed shortly, but the affection present in its title apparently didn’t transfer well into 2020. Case in point, his first release of the new year’s labeled “I Hate You So Much.”

“IHYSM” serves as an assembly of conflicting emotions that are far more relatable than most would like to admit. In a recent interview, Alexander disclosed that he’s just “trying to take these intangible feelings that basically everyone experiences and express them in a very tangible way.” Indeed, the mental tug of war that’s tucked into the lyrics is utterly palpable. “I only lie when I wish it was the truth // I hate you, I hate you so much,” he states just seconds before declaring, “I hate that I love you so much.”

The production works in tandem with the sentiments, alternating between a solitary, wistful guitar and the addictive instrumental that kicks in after the first verse. That juxtaposition was prevalent in a handful of his 2019 songs, which subsequently made his debut EP a roller coaster ride from start to finish.

While his discography’s still blossoming, “I Hate You So Much” is already one of Alexander 23’s best tracks to date. The young artist is shamelessly in tune with his feelings and he’s not afraid to expose them in his music. On top of that, he’s allowing himself the opportunity to toy with various sounds to determine what works best. So far, so good — and we can’t wait to hear what the rest of 2020 has in store for Alexander.