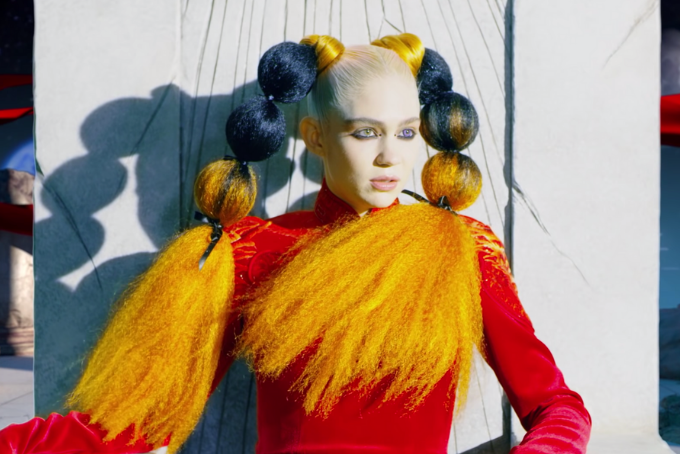 Grimes‘ “Delete Forever” is the definition of departure. The electro-trance artist juxtaposes acoustic guitar and banjo with her signature ethereal vocals to create a completely fresh, unexpected sound. The track is especially jarring when played alongside her most recent singles, “My Name is Dark,” “4AEM” and “So Heavy I Fell Through the Earth,” which pointed towards a gain-heavy, cyber rock album. In contrast, “Delete Forever” is airy and contemplative. The song feels like a moment alone after a gothic rave.

Lyrically, “Delete Forever” is a moment of vulnerability for Grimes, as she mourns the drug-related deaths of her friends. In an interview for Genius, she revealed, “I’ve actually had six friends who’ve died opiate-related deaths.” The song’s accompanying music video shows this haunting destruction, but through a calming, slow-motion lens that parallels the soft tone of the song. Grimes, outfitted like royalty in a gigantic throne, observes the decaying world around her as the camera pans slowly outwards. She’s in a state of resigned mourning, sitting amongst the wreckage of her social circle. “This song was the post-war,” she told Genius.

Grimes is no stranger to sonic twists and turns, especially on her 2015 album Art Angels, which was a break from her eccentric electronic niche. She hopped between thrashing screamo, bubblegum pop and piano ballads without skipping a beat. She even used an acoustic guitar sample on “Art Angel” track “Belly of the Beat.”

But “Delete Forever” is novel in that it is able to stand alone as a solid work of songwriting, even when all the electronic flair is stripped away. Grimes has released fantastic songs in her 10-year career, and most of them are best savored through loud, bass-heavy speakers, and that’s perfectly fine. Even releases like “Oblivion,” her breakout hit that deals with sexual assault, does so with a certain flashiness. But a track like “Delete Forever” has a subdued melancholy feeling that feels refreshing in her catalog.