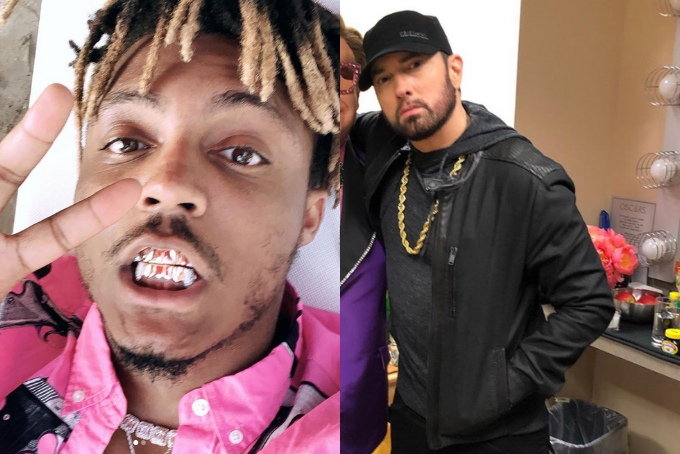 Eminem remembered the late Juice WRLD in a new interview.

In a rare interview with Kxng Crooked for the Crook’s Corner series, Eminem, AKA Marshall Mathers, chatted about his new album, Music To Be Murdered By, revealed new and interesting information about his career over the years and paid tribute to Juice WRLD who died from a cardiac arrest in a Chicago airport last year.

“That kid was so talented. Like his freestyle on ‘Tim Westwood’ – what the fuck? To be so young, he mastered that so f—ing quickly. His potential was so off the charts.”

The two teamed up for a track from Music To Be Murdered By called “Godzilla.” It is currently the most-streamed track from the album and has over 160 million streams on Spotify at the time of publishing. It also recently broke the record for the fastest rap song ever. According to Genius, Eminem’s third verse on “Godzilla” is so ridiculously fast — the verse is about 31 seconds long and is comprised of 224 words containing 330 syllables, which amounts to 10.65 syllables (or 7.23 words) per second.

The rap god also dedicated Music To Be Murdered By to Juice WRLD.

Eminem also paid tribute to the late Kobe Bryant, who passed away in a helicopter crash last month. Among others deceased were his 13-year-old daughter, Gianna, other young members of Gianna’s basketball team (and their parents), the pilot of the helicopter, and a coach. “Who wasn’t a [fan]? I don’t know how you could not be. It makes me sick to my stomach to even try to grasp what happened. Nine people, man.”

The interview revealed that the beat to “Cleanin’ Out My Closet,” one of Eminem’s biggest hits of the early 2000s, was originally meant to go to Bizzare, another rap artist. “That beat was actually a beat I was making for Bizarre,” he revealed. “Then I ended up taking the beat. Sometimes, if someone’s there as I’m making the beat, and they start writing to it, I usually end up giving it to them. But I don’t know what happened with that.”

You can listen to Eminem’s full interview on Crook’s Corner below.