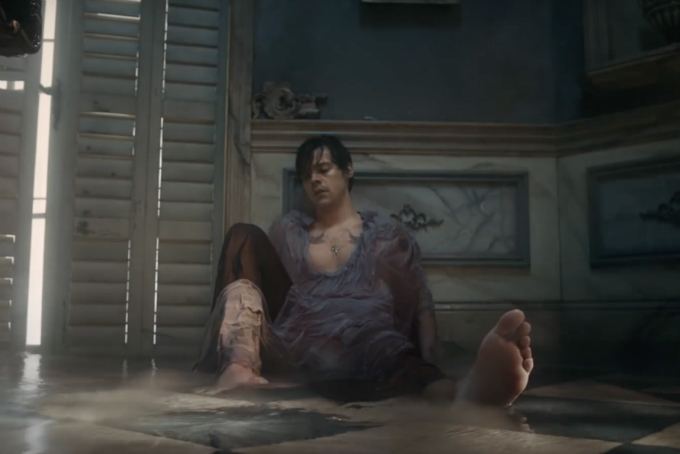 Harry Styles Just dropped his new music video for “Falling” and it’s an emotional one. In interviews, Styles said that this evocative and gut-wrenching song was written about a time when he’d felt like he was turning into someone he no longer recognized. As one of his most heartbreaking songs to date — and on his sophomore album Fine Line — it comes as no surprise that the corresponding music video is just as emotionally taxing.

Throughout the video, Harry passionately plays piano in a sheer Gucci blouse. Fashion, after all, has always been something he’s taken very seriously. Unfortunately, the lavender frock is ruined from the jump, and the video begins with the former One Direction star sitting soaked in water on the floor. “What am I now? What am I now?,” he sings while gazing directly into the camera. “What if I’m someone I don’t want around? // I’m falling again, I’m falling again, I’m fallin’.”

Soon enough, the video becomes reminiscent of that anxiety-inducing scene from Titanic when Jack and Rose struggle to keep their heads above water. As water continues flood the room, it rises so high that the music icon becomes completely submerged. “And I get the feeling that you’ll never need me again,” he sings in total desperation.

The video itself is Styles’ way to visually give his fans insight into a rough patch he found himself in after a breakup. Much like the video, he felt at the time that he was falling and drowning in his own sadness. Though visually stunning, there’s no denying that the video’s an emotionally heavy one. But when it comes to heartbreak, well, we’ve all been there.

Check out Harry Styles’s video for “Falling” up above, and let us know your thoughts in the comments below or on Twitter @soundigest.