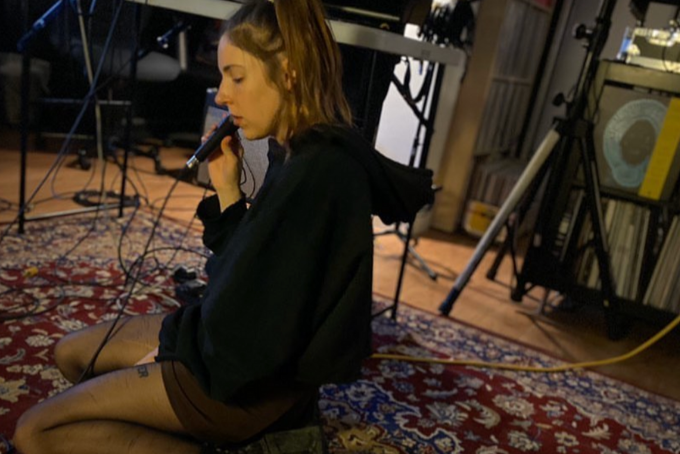 Montreal-based artist June Moon is a self-described popstar and provocateur, who combines her airy singing voice and bass-heavy production for a unique delivery that will cause most listeners to sit up and take notice.

Forever is her music project, and still relatively new to the world — and yet she’s already making waves and getting invitations to play the biggest stages in the world — like SXSW.

Between that and having a whole album that is haunted by a ghost, Forever is worth writing about. And we at Soundigest got the privilege of talking to her and asking her about lost love, ghosts and the difference between June Moon and Forever.

Hello, and thank you for talking to us over here at Soundigest! Let’s start with the basics, your EP, Close to the Flame just came out, and from what I can gather, it is all about the “healing power” of songwriting for you. Can you talk a little bit more about that?

I don’t know any other way, I wake up and try and write because I know it’s good for me and because I love it. I’m very mercurial, and using words — trying to write poems — it all comes very natural to me, and I’m so thankful. I like talking to the universe on the page.

I also read that this record is “haunted by a ghost.” That’s super goth and I love it, but what exactly does that mean?

I’m so glad you love it! She’s in the music. She showed up one night when I was in Bedroom Dubs, and it was winter, there was a darkness, and it was hush. Michael was out, and I was alone working on “Blur.” There was a huge wall of anxiety overshadowing me, I couldn’t find my way, and she appeared with such lightness, and my heart relaxed, and the words started coming. Her story, my voice, and she will always be there now because we recorded it.

I just wrote a poem cause it’s my release show 2night and I have so many feeeeelingssss plzzzzz come out if you wanna show your love Doors at 9pm @divingbellsocialclub @bodywashmtl opening anyways here is the poem : when I’m writing leaving behind that stuff twisting and screaming phone sex my shot my distress the bone refusing to look in disguise big chills freeing the already there great room in the mirror go home with him sweet girl waiting for permission secret stash paper puzzles of the Lord dying to investigate snails at the bar so compelled like pulling your cock out fucking wrecked déjà vu like I’m spooky, eerie shit it’s trying to say I don’t exist like I missed it the sound when it was over autumn leaves circle spiral letting it grow taking the dirt out whoever you wanted to be lost running naked notoriously shy so shy without a body no promises to understand 🥀 Pic from my last show by @bruno_destombes SEE U TONIGHT

I had clear visions about the videos, and I wanted to execute them myself. I like having my hands in the editing — it’s where I cut my teeth — and I find it really fun as way of storytelling. My ideal way of making a music video is choosing all the ingredients myself, showing up on the day with the team, and then recording improvisations. I worked with Geoff Meugens, Michael Brock, Cameron Mitchell and Bronwyn Ford a lot on this release, and they were all so gracious with my energy.

Geoff shot a lot of footage on a film camera, and then hand developed it himself, so editing that footage felt extra special. Thanks, Geoff! We shot the “Make It Happen” video on my birthday at Salon de Thé Cardinal — my favorite place in Montreal. I served tea and birthday cake to some friends, and Maybel sang us all a song. Michael was making me laugh a lot, and I gave Dre some bubbles to blow.

There’s something kind of cool and, well, weird about your music. I could do the typical journalist thing and list off all of the genres I think it kind of sounds like, but the best way I can describe it is that you gave Vaporwave a very strong cup of coffee. What are some of your influences, and what inspired you to go to this particular sound?

My biggest influences are the musicians I work with.

Speaking of your sound, how would you describe Forever?

I’m a big softy, with hardcore feelings. I’ve been so angsty at band practice all fall — like going in an emo direction, and I’m so into it. I’m trying to make music with my band that is chilling, spacey and cavernous. We like to play hard, and I’ve been screaming and breathing heavy into the mic. We’re working on some lighter tunes though, soon… Springtime.

Your actual name is June Moon, but when recording, you go by Forever. What’s the difference between June Moon and Forever? Or is there a difference?

Forever is a project. June is a person.

It looks like you’ll be at SXSW this March, and that’s kind of a big deal. What are you looking forward to most for that show?

Honestly, the heat. Montreal is still going to be cold in March, and it’s going to be ethereal feeling the sun on my skin. The freckles on my face will come out, and I’ll be smiling. And the showcase I’m on is killer — so excited for Bodywash and Erika de Casier.

It’s only been four years since your first EP release, and you’re already playing SXSW. Is that a little surreal for you, or do you feel like everything is happening at the exact right time?

I don’t know, but I feel good today. I work very hard, and I love to work and I love my band. And I just want to keep making music and playing shows.

And of course, my favorite question to ask all artists: why should the world care about Forever?

I cannot speak for the world, but I care about Forever because Forever is sexual, powerful, poetic and romantic.