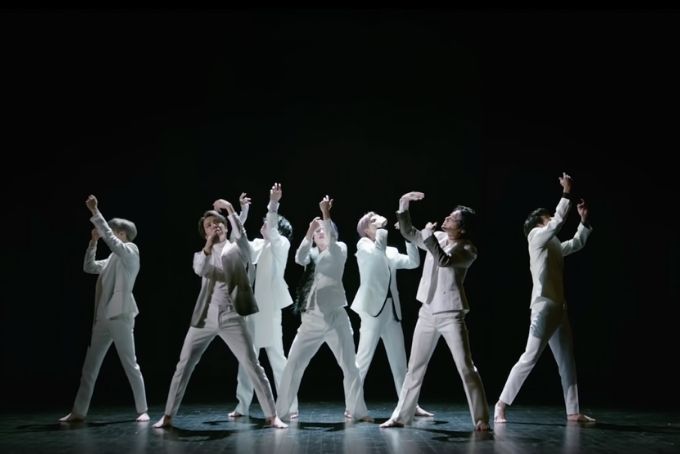 BTS have surprised fans with yet another video for their single “Black Swan.” The group has previously released two videos for the song. The first video stars the MN Dance Company from Slovenia. The second video features the seven members practicing the choreography for the song.

“Black Swan” was the first single to be released off BTS’ newest album, Map of the Soul: 7. Since its release, the album has gone on to top charts all around the world and the music videos released alongside it have garnered millions of views.

The video, filmed in a beautiful and ornate theater, is an evocative experience. Much like the choreography performed by the MN Dance Company, the group’s dance is full of grace and precision. The video cuts between the group performing the song on stage and in darkened spaces, each member illuminated by a single spotlight.

The video focuses on the relationship between light and dark, with not only the setting and lighting choices showing this, but the members’ outfits as well. They alternate between mostly white suits and all black. The white suits feature a touch of gray climbing up the sleeves, perhaps hinting at the idea of light being unable to exist without the dark.

Special effects have a moment in the video when member Jimin reveals a set of black wings for a brief moment. The scene may remind fans of the group’s album Wings, where member V was featured multiple times sporting black wings.

The most stunning moments of the video are the ones showcasing Jimin’s choreography. As one of the group’s lead dancers, Jimin has many solo standout moments, poised and powerful. The music seemingly takes over the singer, his body giving itself completely to the song. The song’s about conflict and the fight to maintain passion in one’s work. The whole group’s choreography points to this, as each note controls their movements.

Whereas in previous choreographed videos, the group has danced outside of the notes so to speak, this time each movement corresponds to a note. They start by plucking the air alongside the strings and continue to lose themselves in the music.

“Black Swan” has shown to be one of BTS’ more introspective and unique tracks. The group, known for their intense and powerful choreography, shows that in a new way, one is more emotional and striking.

Check out the official music video for “Black Swan” below!