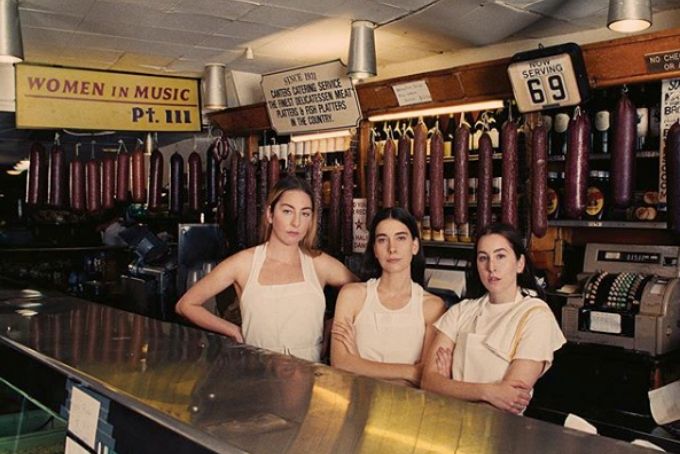 HAIM fans, rejoice: we finally have album news! Last week, the trio released new single “The Steps,” along with a music video and an album announcement. Women in Music Part III will be out April 24th.

The video, directed by Paul Thomas Anderson and Danielle Haim, shows the sisters getting ready for the day. They brush their teeth, slap on some lipstick and end up jumping into the pool of their apartment complex.

The lyrics describe frustration with a partner who can’t handle the fact that the Haim sisters can take care of themselves. “And every day I wake up and I make money for myself // And though we share a bed, you know that I don’t need your help // Do you understand? // You don’t understand me,” they sing in a tone of resigned annoyance.

The production’s the familiar sunshine-y rock that HAIM have made their trademark. The growl-y guitar riff that plays throughout the verses will be stuck in your head for days, along with the oh-so-relatable line “I can’t understand why you don’t understand me.”

Women in Music Part III follows their sophomore album, Something To Tell You. “The name came to me in a dream and I woke up laughing, so I told my sisters,” Danielle said in a statement.

The album name pokes fun at the way many female artists are categorized and referred to by their gender. “I liked it because we are literally women in music and we always get written about that way, so it seemed cool to make it our own and control the narrative,” Alana Haim said. “It made me think about some of our experiences more.”

“I just thought it was funny, plus the initials are WIMP3,” Este Haim added. “Wimp is a hilarious word.”

The album was produced by Rostam, Danielle and her partner, Ariel Rechtshaid.

Check out the video here!