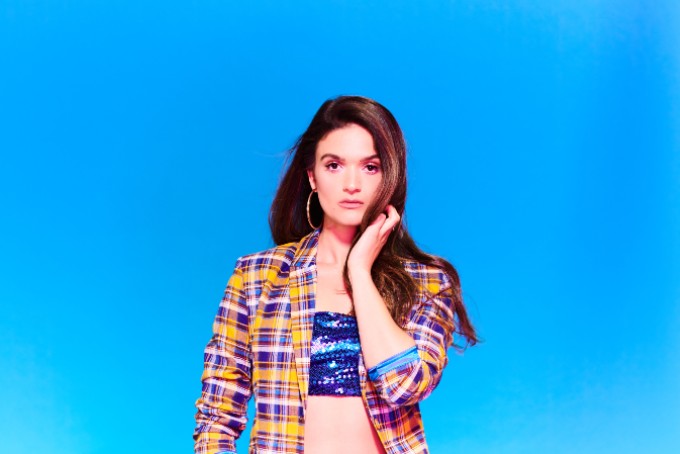 We recently had the opportunity to chat with Sam DeRosa, who you may know from her NBC Songland performance of “Pill for This.” The track currently has over four million plays across streaming platforms. She revealed to us that she’s working on more music to come out later this year, how her music has evolved since her first single released two years ago and how her life has changed since the success of “Pill for This,” including getting signed by Shane McAnally. Check out our interview below!

Your first single “Hard to Love” was released back in 2018. To date, you’ve released four songs of your own. How would you say your music has evolved since 2018?

I would say it hasn’t changed much because my style is still my style, BUT I think I’m starting to take some risks sonically on the new stuff in the works, definitely! Lyrically, I’ve become less afraid to say what I want to say and I’m focusing on songs that I want/need to write instead of what I THINK I should.

Do you have any plans for an album or EP in the near future?

Yes! So excited to announce that there’s a project in the works and it’s coming out sometime this year 🙂

Shane McAnally signed you to his label after your Songland performance of “Pill for This.” Tell us a little bit about the process of being signed to a label and how it has helped change your career.

Shane is awesome! Can’t say that enough. I would say the difference is that now I’m not just writing songs with no plan. He believed in me and has taken me to that next level, where I’m singing the songs I wrote, and I can share them with the world with my own voice. I have a team of people who believe in the vision that I have, that help me with all the tough “business” stuff so that I can focus on the songs and the ideas for all of the visuals… just be the artist. It’s really nice. The Sony Monument crew is amazing and it feels like a family.

You have also found success as a co-writer for other artists, most notably with lovelytheband and their song “Broken.” Is it rewarding to write for other artists or is it difficult to part with your own work? Do you ever wish you could keep one of those songs for yourself?

That’s a cool question and I get it a lot, haha. I feel incredibly lucky and grateful to have been a part of a song that has taken on such a life of its own. I think being a writer, you can’t be selfish. You have to remember that you’ve got a gift and you need to do what’s best for the song to thrive on its own. You’ll always write more. I’m a firm believer in destiny and that it will come back if it’s meant to be. So even when I love a song and secretly wish to keep it, it always ends up where it’s supposed to be — whether it’s me singing or another artist sharing it with their fans and reaching people who need to hear it.

You became more comfortable sharing your original written songs when you were 15 in your school’s talent show! How long prior to that were you writing music? Which instrument(s) did you learn first (if any)?

Yes, that is true! I actually wrote my first song when I was 8. I still have that little songbook that says “KEEP OUT” on the front, haha. I even wrote verses for big pop artists that I loved to “feature.” I started teaching myself piano at 14. It was scary but I’m so glad I did it. I’m still no Alicia Keys on the piano but I can play a bit and that’s how I start a lot of the songs I write. I’m learning guitar too. Always pushing for more to help the songs be better 🙂

When you’re not performing or writing songs, what do you like to do outside of the music world? Do you have any interesting hobbies that we might be surprised by?

Truth is I’m a big TV fan but lately I’m really enjoying diving deeper into fitness. Sounds crazy because most people don’t “like” to work out, but for me it’s been helpful with my mental health. It’s a great way for me to put all of my stress and anxiety into something other than music. I also have started to cook and bake. I still don’t trust my own food, but I’m getting there 😉

Oh, there’s a small list I’ve had that has now grown a bit! I’ve tried to name the #1 and I can’t. I’m genuinely a music fan, so this one is too tough to list just one!

None yet. Finishing this possible EP, then planning to hit the road 🙂

Is there anything else you’d like to add that we didn’t discuss?

Honestly, just that I’m grateful. I’m working really hard to make music for myself that hopefully helps others. It’s taking time but it’s worth it. Songland happened and my social media kind of tripled in numbers, which was wild. Since then I’ve been balancing the music, while trying hard to sift through the messages and genuinely respond as much as I can, because these new friends (or “fans”) really matter. Some tell me stories, some say what they want me to write about, some say that they’re writers themselves and just want to talk. This new platform is one that I don’t take lightly, so I’m excited for it all, but mostly just incredibly thankful.