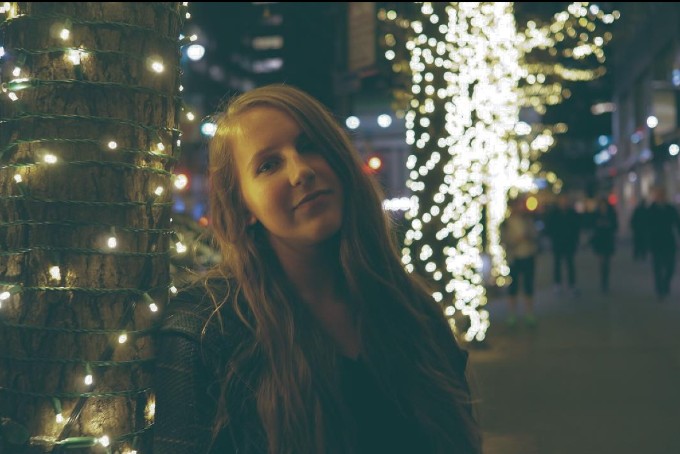 We recently had the opportunity to interview Abrielle “Abby” Scharff, an up-and-coming singer-songwriter whose debut album, You Know The Rest, just dropped on Valentine’s Day. She is an independent artist who has been in the business since 2018 when her debut single, “New York Makes Me Cry,” was released. We chatted about her experience in the industry so far as a self-made artist, how her music came together over the years for her debut album and more. Check out our interview below!

Your first single “New York Makes Me Cry” dropped in 2018 and is on your debut album, You Know The Rest. How has your life changed since you released that track two years ago?

The song itself has taken my career in many positive directions. I wrote “New York Makes Me Cry” for a songwriting competition. The prompt was to write a song about New York. I was a finalist in the competition and that gave me the opportunity to perform with my band in London. Since releasing the single, I got my degree, ended a serious relationship, made a record about it and, ironically, moved to New York.

You also dropped a standalone Christmas song called “Xmas 2017” last year. Tell us a little bit about the track and what it means to you.

Yeah, that song was very cathartic to record. I released it for Christmastime 2019 and wrote it around Christmastime 2018 about Christmastime 2017. The perspective is feeling nostalgic for a relationship that didn’t work out. I think, especially during the holidays, it’s easy to miss the comfort in love as company. The person who this song was inspired by actually plays and sings on the track, which sounds dramatic, but it actually made for a very special and sentimental release.

If you had to pick a favorite track off of your album or a track that you would want listeners to really focus on to get a sense of your music, which track would it be and why?

My favorite track off the record is not the one I feel is most authentic to my music. I think ultimately, I’m a lyricist — a storyteller — first. “I Don’t Have Regrets” is, in my opinion, a very stripped down, yet heavy story. That is probably the song I would show people first: vocals upfront, words on display, sitting in this atmosphere of reflection and subtle heartbreak.

My favorite track on the record is “On & On” also because of its straightforward lyrics. I actually love that both of these songs never directly address the problem. Being a young, developing songwriter, you see and write so many songs about “you did this” and “I feel that.” With these songs, I think I wanted to let the listener — and myself — decide how to feel based on the lyrical content I gave. Emo songs aside, I think “Body Heat” is a banger.

Really following through on that NY//NH bio . Tuesday 6/4, 7 pm: opening for the americana queen @rebeccahavilandandwhiskeyheart & @abbyahmadmusic at Berlin Under A . Saturday 6/8, 8 pm: opening for my musical bff @samrobbinsmusic at The Music Hall Loft . Come hang & celebrate June with me!

If you could collaborate with any artist, who would it be and why? Who would you say inspires your music the most?

Good god. My heart immediately responded, “Stevie Nicks,” but I think I would pass out if that ever happened. She’s always been a big inspiration for me. I don’t think there is one artist or writer who inspires me the most. The people in my life are what inspire me to write in the first place. I have so many musical influences. I listen to a lot of different genres and pull from places you wouldn’t think to look. I have Green Day and The 1975 literally tattooed on me forever. I think it’s important not to look to one genre, band, artist, producer, or writer for inspiration, but to let all the influence wash over you, soak it in, and allow it to channel through your authentic voice.

You come from a musical family. Your uncle taught you three guitar chords and you wrote your very first song that day. Did you always know that you wanted to do something in music or did it happen naturally after you learned guitar?

I was always singing in the talent shows and doing the school play even when all my friends weren’t involved in the arts — now, almost all of them are. In high school, I started performing musical theatre professionally. I remember listening to a Colbie Callait song in the car with my dad and him telling me, “When you write songs, this is the kind of song you’re going to write.” And that terrified me.

I remember thinking, “I’m never going to be able to write a song.” Now, it’s all I do. I think I’ve always had a hunger for the arts, and I think everything I’ve done thus far has led me to the relationship I have with songwriting. I’m too attached and invested to do anything else.

When you’re not writing or recording music, what do you like to do for fun? Do you have any quirky or interesting hobbies?

I’m from Seacoast, New Hampshire, so going to the beach or anywhere with water is calming. I enjoy reading books that have nothing to do with music. Cute or quirky hobby of mine is collaging. I hoard Cosmo and Rolling Stone magazines, rip them up and create something new to hang on my bedroom walls.

Playing ~new songs(!)~ at @mercuryloungeny tomorrow night with @gabbyzmusic and @leahwoodsmusic. Tickets in bio, keep on keepin' on

Describe the process of being an independent artist. How does the process work for putting out your music? Is it more rewarding and do you find that you have more creative control because you’re not attached to a label?

This made me laugh out of exhaustion. You know, I think a lot of my peers are artists first. I am a writer first and perform some of the songs I write as an artist. With writing, there is immediate satisfaction in finishing a song. I think with performing live or releasing music, there is so much work that goes into that. And it’s so true that the more work you put in, the better your results. In all honesty, a big goal of mine as I continue to be an artist is to build a team so that I can focus on what I’m honestly best at. Being a DIY artist isn’t something everybody is gifted at. If you’re impressed with my Instagram aesthetic or the draw at my shows, I promise you it took me so much longer to achieve that than to write the songs.

You spent three years working on your debut album, which has 10 tracks. About how many songs did you write for it and how did you go through the process of picking which songs to include on the album?

Some of these songs I’ve been playing live for what feels like forever, but people never got sick of hearing them. Those include tracks like “Velvet” and “Wearing Color.” I’m still sitting on so much unrecorded music, but we had to choose the tracks that were going to sound cohesive together. Making an LP is already a dying art, so we knew that if we were going to commit to that, we were going to try to do it right.

Feeling so full. Thank you for another beautiful evening, I’m already planning bigger and better (more and merrier) for next year. Wishing you a happy holiday! Keep on keepin’ on

I just had a big album release show, but I’m planning on bringing back my full band for some shows later this summer. Until then, you catch me doing some solo acoustic sets. Instagram is the only social media platform I’m somewhat decent with, so that’s the best way to stay up to date with my music. I fear the day Instagram becomes outdated and I have to learn the ropes all over again in a new app on my phone.

I think that it’s important for me to communicate how important I still think breakup songs are. The reason I still continue as an artist, making the music I do, is because so many people have told me I made them feel — comfort, discomfort, nostalgia, joy, all of it. Relationships are what connect us during the weathering states of our social, political, and environmental climate.