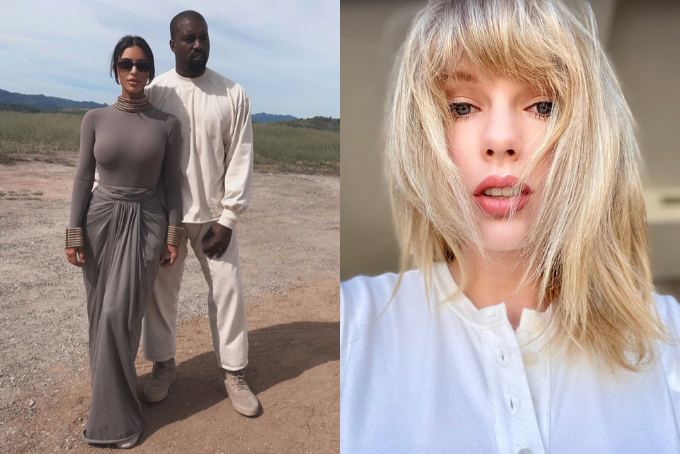 Who would have thought that the infamous call from 2016 between Taylor Swift and Kanye West regarding his Life of Pablo lead single, “Famous,” would resurface in 2020? Certainly not us.

To recap the 2016 incident, Kanye West and Taylor Swift had finally started getting along after the 2009 VMAs incident. In the summer of 2016, West decided to release his single “Famous,” in which he raps, “I feel like me and Taylor might still have sex // Why? I made that b*tch famous.” Upon the release of the track, Swifties everywhere were confused (which might be a bit of an understatement) by the idea that West made Swift famous. This havoc resulted in Kim Kardashian-West releasing snippets of the phone call onto Snapchat.

Upon the release of the phone call, Swift shared her side of the story via an Instagram post.

Even with Swift’s comment on the situation, it turned into quite a tumultuous time for her as the general public began bombarding her social media channels with snake emojis. After “Look What You Made Me Do” and its references to the 2016 incident, the media began to believe this was the end of it all. That is until the entire call leaked onto Twitter this past Friday night.

With the unexpected release of the phone call, Swifties let out a long sigh of relief that they’ve been holding for the past four years. The full phone call revealed that Kanye wanted Taylor to release the song and that Kanye did not mention calling Taylor a “b*tch” or “that b*tch.” And ultimately, Kanye did not play the song to Taylor.

Swifties on Twitter and Tumblr held their own party as they were finally able to prove to the world that Taylor Swift was not lying. They even trended the hashtags #KanyeWestIsOverParty and #TaylorToldTheTruth.

Regarding the line, “I made that bitch famous” Swifties, Taylor’s friends and even Taylor Swift had something to say, both directly and indirectly.

“I pulled 7 million off that album (Fearless) before you did that.” – Taylor Swift proves to Kanye West that he didn't made her famous#KanyeWestIsOverParty pic.twitter.com/i1EZ8Nn3Pt

Kanye: “i made that bitch famous”

Also Kanye: “pleeeeeeeeease Taylor i would love if you released this song you know you have like 2 billion fans like a whole country, pleaseee release & launch this song for me please??🥺🥺🥺”#KanyeWestIsOverParty pic.twitter.com/06l8ioHslH

one silver lining in the apocalypse – justice for T

Kim Kardashian-West reacted to the incident by liking a single tweet.

The video showed nothing new. We all knew that. I’m so confused right now pic.twitter.com/NO0b92Qvpo

But Swifties have pointed out via social media comments that the video proves Kim and Kanye were lying about the incident the entire time.

All in all, we’re glad that the truth has finally been brought forward, despite it being four years later. Two questions are still left unanswered: Why did the Kardashian-Wests have to edit the call and who leaked the entire call? Let us know who you support down below in the comments.