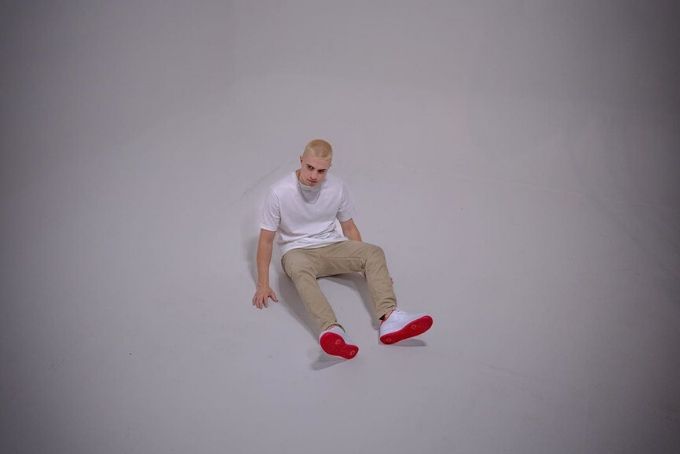 Get to know Kyd the Band and what it’s like working with some of the music industry’s hottest up-and-coming artists! This multi-talented singer-songwriter is all about storytelling through his music, which is exactly why we love “Go There” so much! Learn all about his latest projects and what we can look out for.

Hi Devin, thanks so much for talking with us! And to just get to know you a little bit more, can you tell us the inspiration behind the name?

For sure, thanks for wanting to talk to me. I used to do music with my brother. So “Kyd” is actually the first two letters of his name and the first letter of my name. But that alone didn’t sound complete so I added “the Band.”

And you grew up pretty conservative, do you think that’s had an impact on your music sometimes?

Of course, I think the way everybody grows up affects the person they become. For that specific part of the way I grew up, it affects how I talk. Like it feels physically impossible for me to cuss and so my music, while pretty heavy, definitely reflects that.

You’re on tour with Lennon Stella across Europe right now, have you toured another country before? What are you the most excited about?

I’ve been to Europe a lot over the last 12 months, but this is my first time touring Europe. And it’s my first time outside of the U.S. and Canada. I’m excited because it’s been my dream to have my music go all over the world; I feel so grateful.

You’ve been on the road with NF a bunch and are joining him in Europe. What’s been some of your favorite things about tour so far?

The NF fan base. It’s such a special community, they’re so supportive and very open and willing to listen to someone new like me.

You play many instruments — if you had to pick one, what would you pick and why?

I’d say drums just because that was my first instrument.

Do you think being well-versed in multiple musical abilities helps you have an upper hand when writing a song?

Yeah I’d say so, especially when it comes to the production of a song. Really helps me know intuitively how a song should be shaped sonically.

How did you get into music and when did you know this was what you wanted to do?

I grew up playing drums in church. I never thought I’d do music as a living, I wanted to be a baseball player. It wasn’t till I was probably 18 when I thought I could chase the idea of making this a career.

And you’ve been working with some well-known artists already, how’s it feel to know people are vibing with your art?

It’s very humbling, and I’m just grateful people want to work with me.

Congratulations on your newest single, “Go There” — it’s super different from your last single.  Can you tell us about the inspiration behind this track?

I would say sonically it’s somewhat different than the last single, but if you’ve been paying attention to the lyrical themes of this season it’s the perfect follow to “Dark Thoughts.” Lyrically you will always hear a through-line.

What do you hope fans take away from your new single?

I hope it’s encouragement for those people who want to live deeply.

Tell us about the video for “Go There.”

Even though I haven’t done a video yet for “Dark Thoughts,” the video for “Go There” would serve as the follow-up. I bring back a character from the last few videos, there’s me and then there’s an older version of me. Besides that I want viewers to piece it together or just let it be however they interpret it.

Naw, just thanks so much for wanting to talk about what I’m doing. It means a lot.

Listen to “Go There” by Kyd the Band and let us know what you think in the comments below!