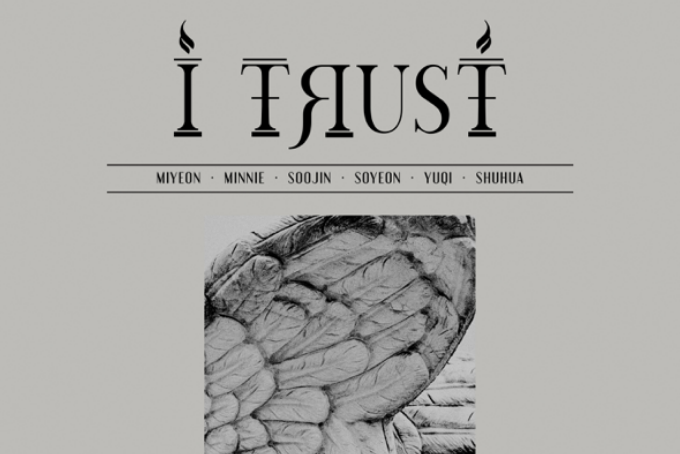 (G)-Idle have made waves in the K-pop scene ever since their 2018 debut characterized by their confident personas and genre-blending hits. The group’s standout sonic style and concept is largely conceived by leader and rapper Soyeon. The sextet has now released their third EP I trust fronted by the title track “Oh My God.” Due to the coronavirus pandemic, the release was postponed along with their planned world tour. In the midst of chaos, the group still managed to release a project that can only be defined as an attempt at carving out their own (G)-Idle genre.

All five tracks on the EP were co-written and composed by Soyeon. “Oh my God” begins the flurry of emotions, one of which is the feeling of temptation. “Oh My God // She took me to the sky // Oh my god // She took me to the sky,” Soyeon and Minnie dramatically sing on the hook. The lyrics and overall theme of the album seem to indicate that temptation isn’t always dangerous. Perhaps falling into something is believing in another. The electro-pop single has tons of beat drops to add to the dramatic nature of the song. The cinematic music video mirrors horror films as the girls sing in front of stunning sets complete with trendy outfit changes.

The flirty b-side, “Luv U,” features snappy tongue-clicks and bass-heavy production to make for an infectious hip-hop track. The synth-pop “Maybe” has the girls ruminating about an unstable relationship.

The previously released “Lion” was featured on Queendom — the South Korean reality show in which the group participated in last year. The powerful and uplifting song fits well into the album as the members’ fierce style and confidence is proudly on display. “I’m a queen, like a lion,” they declare.

The EP closes out with an English version of “Oh My God,” recorded for the group’s international fans.

(G)I-dle recently signed with Republic Records, and the EP is the first release under their new label. As the ladies make moves onto the international scene, they’ve got the trust in each other to carve out and push their sound forward.

Listen to I trust Now: