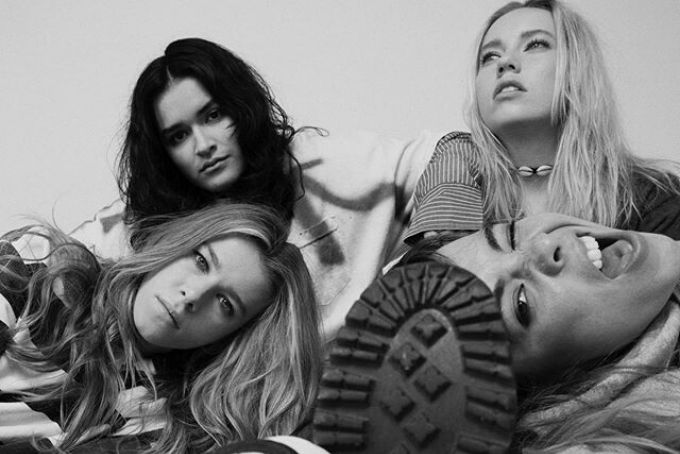 This spring, The Aces are strongly engaging with their fans while preparing for their upcoming sophomore album. The Utah-bred alt-rock band kicked off 2020 right after dropping the first single off the new album; “Daydream” (paired with a cinematic new music video), followed by their most recent release, “Lost Angeles.” As the second single preceding the mysterious new album, “Lost Angeles” shares exactly how The Aces have been experimenting lyrically and sonically.

Think of “Lost Angeles” as an ambivalent ode to the city of angels. The song puts a bittersweet spin on the idea of moving to LA to live out your dreams, but also indicates melancholy emotions of feeling “lost.” Lyrically, The Aces admit to the contradiction of “falling in and out of love” with the city many times. Backed by a warm, summery soundscape, “Lost Angeles” makes you feel as if you’re driving alone down Sunset Boulevard, windows down and music turned all the way up.

In the second pre-chorus, vocalists Cristal Ramirez and Katie Henderson sing, “This used to be romantic, but now it makes me panic // Sometimes I start to shudder when I’m thinking of our golden summer // Thought that by now it’d be over but your memory’s making me colder // How did you lead me so wrong?” What makes this single so different from the rest is that it can be viewed as both a love ballad and a breakup letter simultaneously.

The band expands on the inspiration behind the new single in a recent Instagram post: “This song originated from a poem [drummer] Alisa [Ramierz] wrote on a plane ride over to LA and explores allll of our mixed feelings about the city. It’s interesting how your experiences shape and twist cities or places for you. Sometimes for the best, sometimes for the worst.”

We encourage you all to show The Aces some love and add “Lost Angeles” to your quarantine dance party playlist! In the meantime, be sure to check out the band’s ultra-entertaining Instagram page for a series of bandmate-takeover stories, plus the band’s comical Digital Wellness Tour on Instagram live!