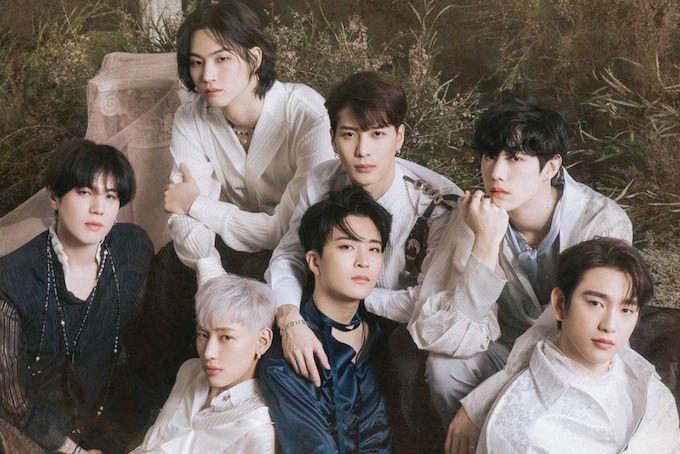 GOT7 is back with their eleventh EP, DYE, and title track, “Not by the Moon.” The new album is heavily conceptualized as a love story (Romeo & Juliet, anyone?), first revealed through sophisticated photo and video teasers leading up to the release.

“Not By the Moon” is a pulsating dance track that blends charismatic vocals and smooth raps from the seven members. The enchanting music video has the septet looking like princes straight from a fairytale. In addition to the romantic regality, GOT7 showcases their signature dynamic choreography.

The six-track collection has songs written and produced by many of the members, as each of the songs can be viewed as vibrant chapters of a romantic story. Album opener “Aura” is an infectious trap-pop hit penned and produced by Youngjae (under his songwriting moniker, Ars). Just like the title track, the song gives listeners standout vocals from Youngjae and impactful raps from Mark and BamBam.

“Crazy” was produced and written by leader JB (under DEFSOUL). The future bass track has the members love-struck. “You make me crazy,” they sing over the chorus drop. The swooning is mutual, as the vocals are just as captivating.

“Love You Better” is written by Jinyoung. The atmospheric pop production emphasizes the suave vocals and raps from each of the members. “Trust My Love” is a reggaeton-influenced dance production that has the members continuing to profess their love.

“Poison” was composed by youngest member Yugyeom and it’s perhaps the one we’ll be dancing to in the club (or our rooms) all summer long. Its bass-heavy trap production is certainly a highlight.

The physical version of DYE features four additional tracks that were performed on their recent Keep Spinning World Tour.

GOT7 has always had a colorful discography and identity. Each comeback is highly anticipated, as they’re never afraid to experiment and grow as artists. Their latest effort is a manifestation of their maturity and sophistication as a six-year-old group.