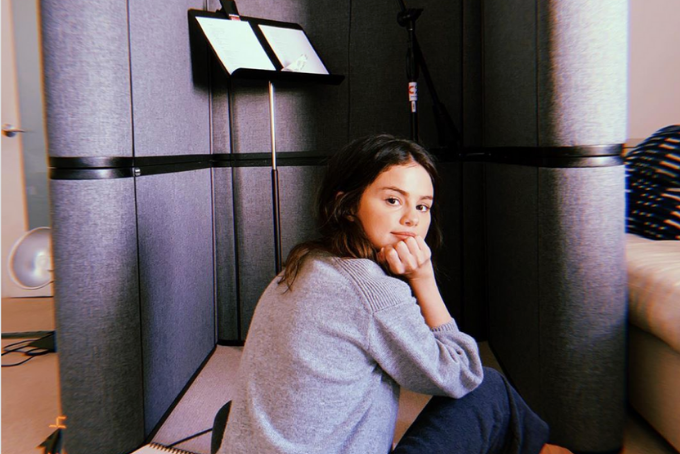 Selena Gomez is making the most of her time in quarantine.

The 27-year-old “Boyfriend” singer shared a photo to her Instagram page on Saturday, May 2, showing off her “makeshift recording studio” in her very own home!

Even though the talented singer-songwriter just released the deluxe version of her album, Rare, which included three bonus tracks, the first of which is her new single, “Boyfriend,” Gomez is hard at work on more music for her fans.

Makeshift studio so I can work from home 🎧🎼🎤

Rare was the “Lose You To Love Me” singer’s first album in five years. She weathered many lifechanging events in that time span which served as the inspiration for her new album. Her ex-boyfriend, Justin Bieber, got married to model Hailey Baldwin, and Gomez dated and broke up with The Weeknd. She also endured a kidney transplant and revealed her lupus diagnosis to the public. More recently, in an Instagram Live with fellow ex-Disney actress Miley Cyrus, she revealed that she was diagnosed with bipolar disorder.

“Lose You To Love Me” was the first single from Rare. The track was a smash hit and eventually reached No. 1 on the Billboard Hot 100 after debuting in the top 20 in its release week. The track documents Gomez’s side of her breakup with Bieber. She received praise for the song’s vulnerability and lyrics. Vulture magazine named it the second-best song of 2019.

The “Boyfriend” music video was released on April 10. It features Gomez going on multiple dates with different men by whom she is seemingly not so impressed. Ultimately, she decides to turn each one of them into frogs. It’s a hilarious take on the “frog prince” fairytale.

Another video was released last Thursday, April 30, called “Boyfriend Doll Version.” The video has the exact same storyline as the original, except this one features dolls instead of Gomez and various actors and actresses. If you’re into stop motion films, this video is excellent and very similar to those.