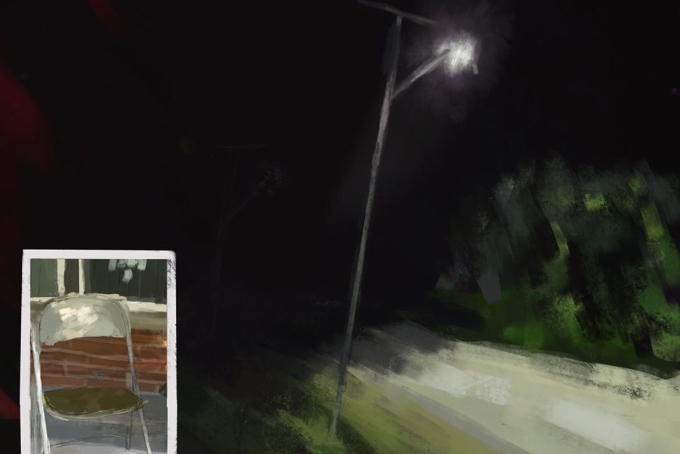 Car Seat Headrest‘s fourth studio album, Making a Door Less Open, takes us on a captivating tale of a man grappling with regrets, an inferiority complex, and a tendency to willfully chase chaos. Its tracks range from quiet and reflective to boisterous and shallow, each capturing the emotional turmoil that comes from digging too far into the past. Or, in this case, the hell we put ourselves through when we open doors we should’ve left shut.

On “Weightlifters,” a warning siren appropriately sets the tone for the journey that’s about to unfold. As the beat picks up, a smattering of instruments fight for the same airwaves. The result? A jarring listening experience that’s akin to being thrown into a version of Super Mario set in a post-apocalyptic war zone. It’s chaotic and it’s wonderful. The song drives home that what we see in the mirror is heavily influenced by our opinion of ourselves. It’s not a super fresh concept — one could even argue that it’s been done to death by the likes of pop stars and powerhouse girl groups — but because Will Toledo highlights the issue and presents a solution, the song goes from expected to profound. “If thoughts can change your body, it’s on me / I believe thoughts can change my body.” He accepts accountability for his abysmal self-confidence and sets out on a mission to change it. Step one: He’s gonna start lifting weights.

Good morning. Our new album Making A Door Less Open will be out on May 1 on @matadorrecords

He doesn’t just have body image issues, though. On “Can’t Cool Me Down,” we’re brought straight into his very crowded psyche where voices sing over each other and cry out for help.
“I need you to help me, please,” one of the personalities cries out, which is brilliantly juxtaposed by calming piano riffs. As this situation becomes more troubling in his mind, the music keeps pace: there’s synth laddering followed by a circus-like symphony of sounds. “Can’t Cool Me Down” is both a trippy-as-hell listening experience and an impressive attempt at capturing the discomfort of hearing voices in your head.

On the pair of “Deadlines” tracks, “(Hostile)” and “(Thoughtful)”, we get two very different accounts of a man who’s reunited with a past lover. In “Deadlines (Hostile),” he knows he shouldn’t be reopening this door, but tells himself it’s perfectly OK because he’s just seeking information; he doesn’t believe it and neither do we. The music builds, highlighting both the urgency of the situation and the heat between these characters. This track is rock, through and through, but really it’s pure sex. And we’re along for the ride, enjoying the tantalizing guitar riffs and relentless drums as we go. It’s also the best track on the  album.

Instead painting a picture of excitement and anticipation before his sexual encounter, “Deadlines (Thoughtful)” highlights his hesitation and anxiety; it even begins with drums that sound like a racing pulse. As more instruments join the mix, an electronic guitar steals the show, riffing up, down and everywhere around. The effect is mesmerizing and almost makes us forget why we’re here — which is exactly what he wishes for himself. He reluctantly goes through the motions when he meets his former flame, saying over and over that, “Oh, compassion, it’s transforming me into …” of what, he’s not sure. The track is a hyper-charged account of an affair he’d like to have again, whereas in “Deadlines” (Thoughtful), he’s yelling at himself for what he’s done. The latter is a realistic and refreshing account of the guilt and shame that comes with doing something against our better judgement.

Between these two exceptional tracks are two songs that are significantly less exciting. First up is “Hollywood,” a noisy exposé of how Hollywood’s elite live. He’s sick of Hollywood and its drugs, sex and cheap thrills; he yells it and sings it — sometimes all at once. Instead of telling a story, this song is laced with loud gripes that most of us have heard before. Similarly, “Martin” is one of the more forgettable tracks on the LP. To call it a camp song would insinuate it’s an upbeat track that will delight the masses. But while the music is campy, the lyrics are a stroll down memory lane that no one but him will understand. There is, however, an unexpected but fantastic trumpet solo that redeems it a little.

Wedged between “Hollywood” and “Martin” is a random, yet incredible music interlude called “Hymn (Remix).” It’s pulsating and gives us those strong video game vibes that we got on “Weightlifters.” “I feel it in my heart,” are pretty much the only lyrics we get out of Toledo here. Though he never says what it is, we get a sense of it from the rousing instrumental experience that wages on. It might be about drugs. It might also be about feeling high on life. Either way, it’s a dose of pure fun.

“What’s with You Lately” is another short but sweet palate cleanser. It’s not the best song on the album, but it may be the most memorable. It’s a stripped-down track with simple guitar and simple vocals to match, which dives deep into how it feels to outgrow your stay in a place or a moment. “You know a couple of guys were thinking about moving away / ‘Cause there’s less and less here that seems like it’s a reason to stay,” Toledo sings. Though the second sentence is a grammatical nightmare, it perfectly captures the sorrow of not wanting to move on even though you have to.

“Life Worth Missing” maintains this somber tone with impressive results. It opens up with angelic-sounding synths that capture the song’s religious ambiance to perfection. Toledo points out the flaws in asking God for forgiveness, since once our sins are washed away we’re left with the freedom to repeat them again and again. He sings about how in spite of this, we continue to have faith in higher powers anyways. His faith is waning, though. He talks about wishing he could start over, all while grappling with his mistakes. “I feel the weight of anger, pain and sorrow breaking over me,” he sings, seeming to apologize for his existence as the song comes to a close. It’s a beautiful song that will completely gut you. Don’t skip this track.

The theme of spirituality carries over into “There Must be More Than Blood.” It starts with impressive guitar riffing and an exciting premise — our main character is at a party looking for a beautiful woman. He insists these are not his people, and that he’s only there for her. Just when we think we’re in for another exciting reunion like in both “Deadlines” tracks, the song takes a bizarre turn. He sings about how his life could be better, then segues into the song’s namesake lyric, “There must be more than blood that holds us together.” The song continues to throw out pretty lines, which either sound a little too generic or simply don’t connect with anything else.

The album loses some more steam once we reach its closing track, “Famous.” Here, the production is exciting and interesting, but as a whole, this song feels like too little too late. It starts off with the same kind of heartbeat intro that we got on “Deadlines (Thoughtful),” and it resorts to the same kind of repetition that we got on “Hymn (Remix).” We’ve heard this plot before, too. He’s once again pleading about wanting to start anew and how he’s tired of feeling worthless. The music is upbeat and hopeful, which gives the illusion that he’s finally going to turn things around. But the song ends rather abruptly with only the final words of, “Did you change your …” It’s not irksome to have an open-ended conclusion. it’s irksome that this album starts so strong but descends into a formulaic product by its end.

Making a Door Less Open is a pretty literal exercise in seeing what’s behind door number one, two, three and beyond, but it mostly works. Some of the tracks are stronger than others, but even the songs that don’t quite stand out are redeemed by their innate intellectual merit. This release by Car Seat Headrest will make you stop and think about your past, future and spirituality. It’s an impressive lyrical and instrumental feat and a wild ride worth taking at least once.