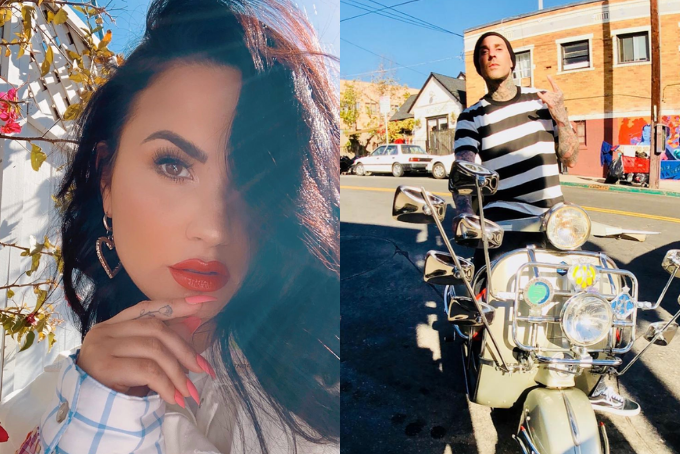 Earlier this year (pre-quarantine), Demi Lovato released the spring self-love anthem, “I Love Me.” On May 7, Demi released an “emo version” of the anthem with Blink-182 drummer, Travis Barker.

While the first version of the song has extreme pop elements to it, the Travis Barker version brings a rock and alternative edge. This speeds up the song and brings a richer sound, as the electric guitar and drums rage behind the lyrics. This reimagined version of “I Love Me” feels nostalgic and new all at the same time, and it’s definitely bringing us back tour middle school emo days..

This isn’t the first time Demi and Travis have teamed up. The music video for Demi’s 2014 summer single, “Really Don’t Care —” featuring British singer Cher Lloyd — was filmed during the 2014 LA Pride Festival & Parade, and there were a couple familiar faces throughout the video. One face that popped up was Travis Barker drumming while Demi belted out the empowering song. The pair even performed “Really Don’t Care” live on stage together.

“I Love Me” is the second single released since Lovato’s return to music, and it got fans epicly pumped for her forthcoming album. Her music video for “I Love Me” even left golden nuggets about her past that we’re expecting will come back to life in this next record (we all saw the Wilmer Valderrama and Jonas Brothers look-alikes, and we’re dying to know what that is about).

Even with the emo version of the single, the message is not lost. With lyrics like “Oh, why do I compare myself to everyone? // And I always got my finger on the self-destruct /// I wonder when I love me is enough,” and, “Why am I always looking for a ride or die? // Cause mine’s the only heart I’m gonna have for life.” You feel as though Demi is reading from your personal diary.

Demi Lovato and Travis Barker’s emo version of “I Love Me” is an exciting new way to look at the pop anthem. You can stream and purchase the fun mix now.