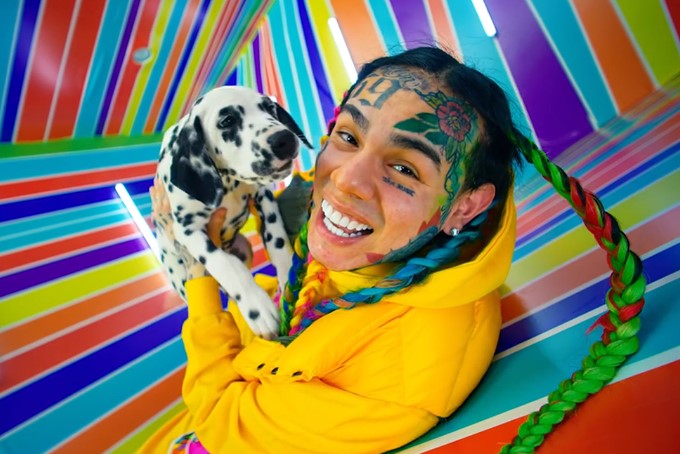 Multi-platinum-selling scream-rapper 6ix9ine is out of prison early and has a new track out to mark the occasion. The 24-year-old Bushwick, NY native (born Daniel Hernandez) was granted early release into home confinement in April, due to concerns of contracting COVID-19 — the rapper suffers from asthma, putting him at higher risk to the virus.

6ix9ine will serve out the remainder of his 24-month sentence at home. He was sentenced for racketeering and other gang-related charges in February 2019, for which he faced as much as 37 years.

His new track “GOOBA” was released on May 8, coinciding with his 24th birthday. “GOOBA” picks up right where he left off musically — a classic 6ix9ine track, featuring aggressive and sexually suggestive lyrics boasting about himself, coupled with a bass-heavy trap beat — produced by PayDay and Jahnei Clarke. The release marks 6ix9ine’s first single in almost two years, and is the lead single on his highly anticipated album, slated for release in August.

Most notably in the song, he references the Diddy Bop — a dance made famous by rapper P-Diddy, also throwing back to his 2018 album DUMMY BOY and a song on the album “STOOPID”: “Are you dumb, stupid or dumb, huh?”

He touches on the active COVID-19 pandemic: “Two step, spin around, so fly, pilot. They sick, been hot way before coronavirus… Who did that?” He also addresses those who criticized him for cooperating with authorities during the trial process: “You big sad. Tell me how I ratted, came home to a big bag.”

The accompanying music video features a group of women twerking, including 6ix9ine’s girlfriend, Rachel Wattley, while wearing rainbow clothing and covered in paint. 6ix9ine then shows off his ankle monitor, before transforming into an animated rat, which is a reference to what many haters have called him.

To promote the release and set the record straight about his legal troubles, 6ix9ine took to Instagram Live for just over 13 minutes on May 8, and broke the record for most unique viewers on an Instagram Live video at one time, with over two million.

In the official music video and the Instagram Live session, 6ix9ine is seen wearing a chain with a pendant of Bruce the Shark, from the 2003 Disney-Pixar hit Finding Nemo, and fans noticed.

People talking about how 6ix9ine just broke the Instagram live viewers record but I’m more caught up with his massive diamond pendant of Bruce from Finding Nemo. pic.twitter.com/jB2KJtCfcv

No touring plans have been announced yet, but as the pandemic eases and his home confinement sentence expires, 6ix9ine is expected to return to the road as soon as possible, to capitalize on this momentum.