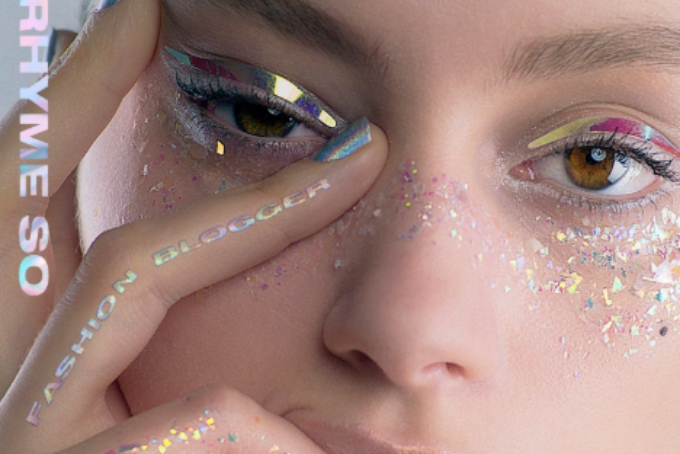 RHYME SO is giving the cold shoulder to the social media age. Composed of an Australian poet (Rhyme) and a famous Japanese producer Shinichi Osawa, (SO), they’re the most likely, unlikely duo you’ve ever seen. Their music is one part art house, one part dance party, and all parts interesting and exciting.

“Fashion Blogger” is a fun look at a serious topic — the banality of social media. Cloaked in a unique beat and an irresistibly  fun music video it’d be easy to miss what the actual point of this single is, but that’s all part of the experience. And it’s a pretty amazing experience to have.

Soundigest got to chat to the new it kids of Future Pop to ask about everything, from influences to figure skating, to get to know these new rising stars.

Rhyme and MILK were both competitive figure skaters before this, so that’s obviously one reason — but why figure skating for this video? How do you think this visual connects to the song?

RHYME: That’s a good question. The old saying goes ‘stand out, be unique’ so to stand out in our unique way we wanted to use our skills in ways other music videos had not skated upon. For this song, we wanted to get in touch with our inner child, one who had no judgment and had no conditioning therefore visually it was both a treat and a challenge when storytelling. Throughout, I reminisced about the feeling of skating disco on a Friday night, where everyone would dress up and the lights would hit the rink and there was fun music playing. Once this lockdown is over we’d love to have an Ice Skating show, where tickets are sold not only to watch us but including skate rental as well.

I love that you’re using a bit of humor and levity to tackle something that’s pretty serious, especially right now since everyone is forced to stay inside. Why do you think it’s important for artists to speak out against all this social media obsession — especially when it often helps your careers?

RHYME:  Well said. You know I didn’t really write this from any specific side, other than what I felt was closest to the truth. A lot of it was listening to what other people said and literally the exact dialogue of how people were talking around the time. When we are faced with ‘direct’ topics I find it is easier to pick what is essential information which then leads to what is an essential career. Right now in the world, with social media, what is essential is using it for good influence especially as artists.

Ice to us is introspective, we love the texture created and metaphors behind it. We are all a little frozen at home, so ice is a strong theme to reflect and skate on.

(This is not just a problem for artists, it’s a warning of the “recognition on the internet”. Most people know that there is no essential happiness here and still they can’t get out. It is an issue for all of us. Of course, there are many good aspects as well.)

Where did the idea to work with MILK come from? Just the mutual skating connection or something else?

RHYME: Our amazing A&R connected with MILK for this project.  We are so thankful for MILK’s similar outlook and support on the mutual feeling of having been Dragged* from competitions too. After getting to know MILK, I can say she is a Queen with a golden heart and also a passionate activist who advocates for others.  Perfectly put, she openly offered to reach out her hand to us.

In general it looks like you feature a few LGBTQ+ artists in this video — why did you choose to do that?

RHYME: We chose to do that because we know how to work it a little more sassy.  This story of fantasy has no borders. But, it just so happened that a lot of people who came on board through believing in the song and the visual story were part of the LGBTQ+ community, and many are part of the top creators in Tokyo who had been working with us as a team.

Looking back at influential moments as a child, I had volunteered for the Mardi Gras Parade when I was young and my mother did my makeup and had many Drag friends whoI consider like my godfathers. Shin also spread a lot of good music vibes especially in the LGBTQ+ community in Japan, Tokyo when it was making its stand up. We are in complete support of the community and will continue involving whoever the song at the time attracts, no matter what community or identity comes up. Music is free.

Obviously, the legendary Shinichi Osawa, aka MONDO GROSSO, is part of RHYME SO, so that informs the music you’re making — but what are some other influences for you?  I could come up with descriptions all day, but how would you describe the music of RHYME SO or the direction you plan to head?

(Some of the post-punk influences of the 80’s. But I’m not interested in categorizing any particular artist or genre at all.)

RHYME: Shin teaches me a lot about new wave music and his era which have influenced a lot of post wave experiments that we are currently working on. We love cult classics varying over a span of different genres. But I have to chime in because in actuality I am a full metal and psych rock n roll head. I also love experimental hip hop jazz and soundtrack music so you can expect a mix of all of this coming.