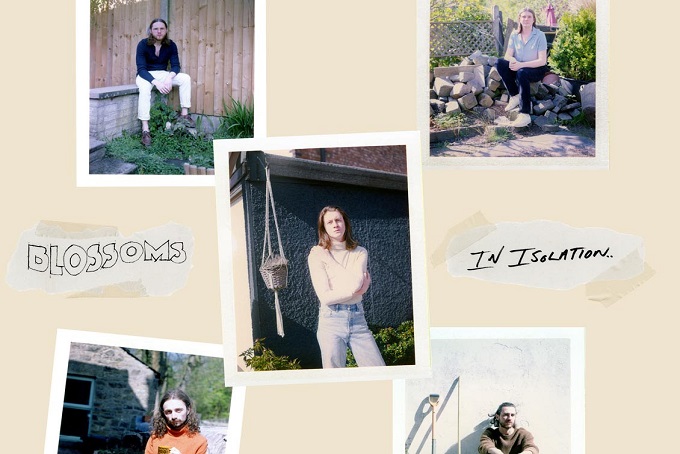 Nowadays, with the future of live music on hold, musicians are doing all they can to continue sharing music with fans. As a matter of fact, British band Blossoms recently announced their new project, Blossoms In Isolation. They have been releasing videos performing their own songs, as well as some covers in the comfort of their homes.

So far, Blossoms have released at-home versions of “My Swimming Brain” and “There’s A Reason Why (I Never Returned Your Calls),” off their full-length albums Foolish Loving Spaces and Cool Like You. Also, they covered “Lost,” by multi-genre singer Frank Ocean, and the 1966 The Beatles hit, “Paperback Writer.” Moreover, they have had guest musicians joining them. British musician Miles Kane features in their cover of Tame Impala‘s “The Less I Know The Better” and James Skelly from The Coral accompanies them in the cover of The Coral’s song, “Dreaming Of You.”

We're pleased to announce that we'll be releasing our recent isolation covers, including tracks with @JamesSkellyBand (@thecoralband) & @MilesKaneMusic, over the next few weeks starting with our Frank Ocean cover 'Lost' available to from midnight tonight https://t.co/kBlBFUwerT pic.twitter.com/yEGB3hED5F

Blossoms also revealed that all these songs, including “If You Think This Is Real Life (In Isolation)” — which is set to release on May 25 — will make up an album that’ll come out later this year on CD and vinyl. The band is also releasing a live album on July 3, Live From The Plaza Theatre, Stockport, which consists of their February 11 performance that they recently streamed on their YouTube channel. 2020 is definitely not a bad year for Blossoms!

Overall, every Blossoms In Isolation video is unique in its own way. Let us take a look at some of them:

This rendition of the 2012 track is amazing. We can see bassist Charlie Salt singing in the shower to get the perfect echo, and percussionist Joe Donovan surprises us with his abilities to play anything. In all the videos, he plays diverse objects, which makes each video funnier than the one before. In “Lost,” Joe plays a Stella Artois beer box and a pair of scissors.

At the beginning, we can see lead singer Tom Ogden‘s cute dog, which gives the video bonus points. This version of Blossoms’ song is almost as good as the original. Myles Kellock‘s talent with the keyboard is exceptional, and Josh Dewhurst‘s guitar never disappoints. In “My Swimming Brain,” Joe plays a Puma shoes box, an alarm clock, some coins and his bracelet watch.

We boldly admit that this cover is better than the original. Covering The Beatles is something that many artists fail at doing, but Blossoms seem like the perfect band to achieve it. The band’s admiration for the Liverpool four-piece is evident in this interpretation, and we could watch Tom and Charlie harmonizing all day! In “Paperback Writer,” Joe plays measuring spoons and some type of metal decoration; he definitely does more than Ringo Starr in the original music video.

On a side note, the Liverpool studios where Blossoms have recorded their albums, Parr Street Studios, are facing a difficult situation. According to NME, there are intentions to sell the privately owned property to developers. Tom Ogden referred to the situation, saying that “some of the happiest memories we’ve got as a band are in that studio. It feels like a second home because we’ve never really recorded anywhere else. Every song on our albums has been done there. It feels like our Abbey Road.”

4. “There’s A Reason Why (I Never Returned Your Calls)”

In “There’s A Reason Why,” Joe plays a fork, a knife and a spray, which we hope is not hand sanitizer, because we need to save that for as long as possible. As a whole, Blossoms In Isolation is a marvelous project, and we cannot thank the band enough for these awesome videos!

Remember to stream Blossoms In Isolation and Live From The Plaza Theatre, Stockport on Spotify while you wait for the physical copies to release.