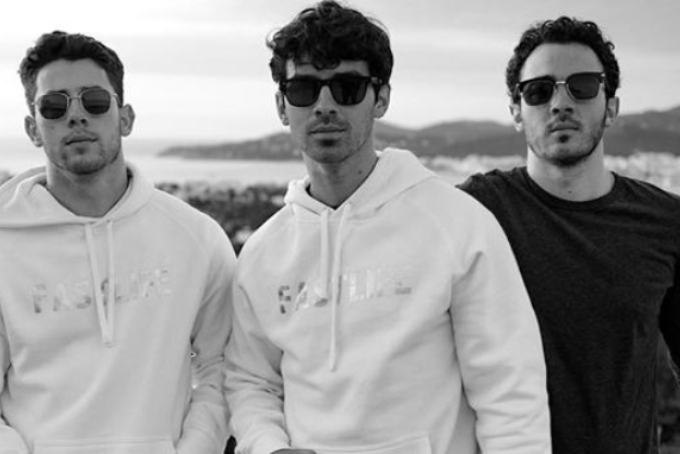 If you thought the Jonas Brothers were going to slow things down after their epic comeback known as the Happiness Begins era, think again. Turns out, the brothers are continuing their hot streak. Today, May 15, they released two brand new songs — “X” featuring reggaeton singer-songwriter Karol G, and the sweet and sentimental track “5 More Minutes.” And yeah, you’re going to want to give them both a listen. Like, now.

When it comes to “X,” there’s loads to unpack. The sexy, sultry collaboration gives off dimly lit nightclub vibes, and the song’s lyrics are both seductive and vengeful simultaneously. “Don’t know her name / But I know that I need her,” they sing before diving into what must be the best lyric on the whole track. “She said Ooh ooh ooh,” they croon on the chorus. “Kiss me like your ex is in the room.”

As if the song didn’t already feel like the ideal track for a night out in Miami, Karol G joined in on the bridge with a Spanish verse that’s as tantalizing as the Florida city’s world-famous, Latin-influenced nightlife. And once clubbing is back in full swing, we expect this track to be flooding through city streets in the wee hours of the morning.

In addition to “X,” the guys dropped “5 More Minutes,” a song that strays from the sexiness of the previous tracks and errs on the sweet side instead. In it, they beg the ones they love to stay just a little bit longer. “Give me five more minutes,” they sing on the first verse. “Baby, I’m not finished loving you.”

The truth is, we’ve all been there. We’ve all had relationships we wished could last forever that didn’t, even if we knew they wouldn’t work out in the end. But at the end of the day, hearing the Jonas Brothers’ sweet words might just convince you to stay. Because while it’s entirely possible that the relationship may not last forever, sparing those extra five minutes might just change everything.

Check out the Jonas Brothers’ “X” and “5 More Minutes” above, and let us know what you think about the new tracks in the comments below, or on Twitter @soundigest.