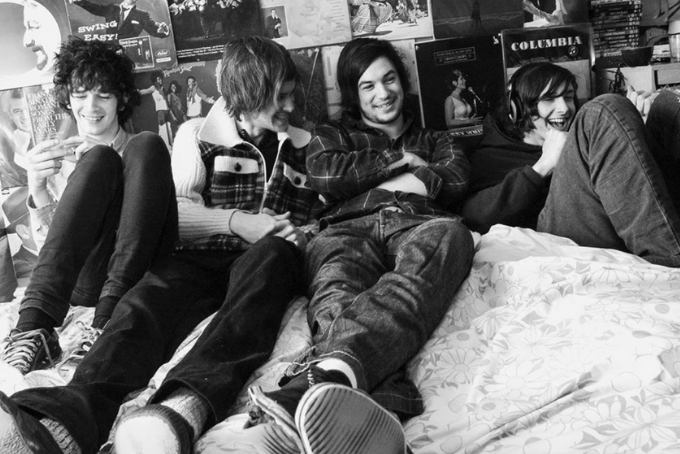 There’s only one word to describe The 1975’s success: explosive. Over the last decade, the band’s been relentlessly releasing critically-acclaimed music. It feels like with every season, the band’s embarking on a worldwide tour or unveiling a new project — much to the delight of their die-hard fans. Now, three albums and a handful of EPs later, they’re mere days away from releasing their latest creation, Notes on a Conditional Form.

Ahead of the album’s May 22 release, the band released a handful of its songs, including  “People,” “Frail State of Mind,” “The Birthday Party,” “Jesus Christ 2005 God Bless America,” “Me & You Together Song,” “If You’re Too Shy (Let Me Know)” and “Guys.” With the exception of “People,” a rousing call to action featuring a not-quite-screaming Matt Healy, the songs we’ve heard so far from Notes on a Conditional Form showcase a more relaxed, stripped-back version of The 1975.

They seem to be shelving the synthesizers, benching the soulful choir singers and paring back the production effects in favor of tracks that are a bit simpler and softer. Their latest release, “Guys,” maintains this more subdued sound. Set to soft guitar and violins, it’s an ode to platonic love that’s soulful, heartfelt and sure to stay in your head.

Written collectively by all of the bandmates, “Guys” features Healy fondly reminiscing about the band’s 2002 origins and all they’ve been through since. Sure, they were all crammed up in a probably-not-so-great apartment when this whole journey began, but Healy would gladly trade all of his fame and fortune to relive those days — at least that’s what he says. “We all shared one apartment // Man, they were the golden times // They were the best of my life.”

Though the music is soothing and the message is sentimental, “Guys” still showcases nuggets of the lyrical flair that we’ve come to love and expect from The 1975. For instance, instead of saying the memories brought him to tears, he says they, “started wetting my eyes.” It’s extra, of course, but the band’s enigmatic frontman is the first one to call himself pretentious.

“Guys” feels like a song that’s more for them than it is for us, but the way in which it recalls old friends and the good times they shared is something we can all relate to. It’s honestly a refreshing take when you consider how oversaturated radio can be with songs about purely romantic love.

“Guys” is a song you can’t help but love. It gives you a glimpse into the private journey they all took together and how they came out stronger because of it. They’re arguably at the height of their fame, so when you hear lyrics like, “You guys are the best thing that ever happened to me,” at this stage, it’s hard not to admire them. Often, when bands reach this level of stardom, they have a hard time dealing. Their creative differences may come to the surface, or they may even shift members or break up because everyone’s simply grown apart. The 1975 seem to have broken the mold — and that’s a wonderful thing.

Not only is “Guys” the perfect final track for Notes on a Conditional Form, but it’s also one that gets you excited about the band’s future. When a group can stay this good for this long, they’re likely to only get better as time goes on. And if The 1975 can continue to stay aligned and in love with the creative process — and each other, too — the chances that they’ll continue to deliver musical masterpieces in the decades to come seem pretty good.