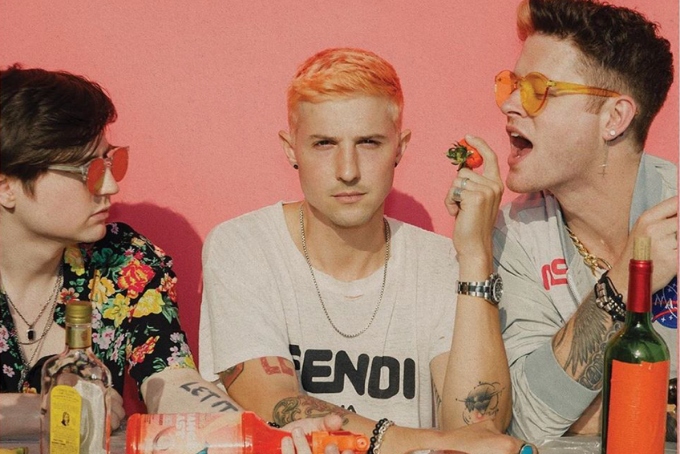 Nashville dance rock group Hot Chelle Rae is back — and in a big way. The group’s comeback began with 2019’s “I Hate LA,” a rhythmic record about how things used to be and how the opportunity-laden California city has changed for the worse. The song, which was their first in five years, was later included on their Tangerine EP, which came out at the top of 2020. The project is a roller coaster, ranging from soulful love ballads to a synth-based, high-bpm track. The EP, in many ways, set the trio up for a mid-year return to the road. That is, until the looming threat of the coronavirus changed everything.

If it weren’t for the pandemic, Hot Chelle Rae would’ve completed their 29-date, cross-country comeback tour, dubbed the Tangerine tour, at the end of April. But with COVID-19 shutting down venues, prohibiting large gatherings and placing the entire world on hold, the opportunity for both their new and old songs to be heard in concert halls across the country has been postponed. Still, the lads have found interesting ways to keep fans engaged in a safe, socially-distanced manner.

TikTok is just one way the group has been staying connected with fans during these confusing and uncertain times. On May 1, they released a track called “B.O.R.E.D.,” which highlights some of the activities the band is doing to pass the time in quarantine. They then invited fans to send TikToks back, showing how they’ve been passing the time while hunkered down at home.

Hot Chelle Rae’s shift to new media has proven beneficial; their official TikTok account has built up a following of over 300K after the band started posting daily content featuring songs from their latest project, as well as hits by other artists, which have garnered over 3 million likes. Not to mention, more than 3 million Spotify streams of the tracks on Tangerine prove that quarantine — while putting touring out of the question — has given Hot Chelle Rae a near-perfect window to market themselves on new media.

The group’s heavy presence on social media — particularly on TikTok — has also kick-started a resurgence of their past hits. “The song I Like It Like That by Hot Chelle Rae just unlocked a memory I forgot I had,” one fan tweeted. The song helped catapult Hot Chelle Rae into the stratosphere of internationally established artists. It featured now-defunct California hip-hop duo New Boyz, clocked in at No. 28 on the Billboard Hot 100 chart and is certified platinum in three countries. It has been streamed on Spotify over 51 million times to date, with a music video boasting over 29 million views that depicts a carefree party, where all that matters is having a good time, regardless of consequence.

The group first took the airwaves by storm in 2011 with their radio-ready sophomore album, Whatever. The project featured the solemn ballad “Why Don’t You Love Me” with Demi Lovato, as well as their two-time certified platinum single, “Tonight Tonight,” which peaked at No. 7 on the Billboard Hot 100. The jammy, guitar-heavy tune chronicles a post-heartbreak adventure with friends — one that’s just as fun as it is hectic, as lead singer Ryan Follesé tries to get over a “really really messed up week.” The track resonated with a fresh, young audience who rely on streaming services as their primary source of music consumption; it has amassed over 140 million streams on Spotify to date. The corresponding music video, which shows the band attending a children’s birthday party before playing live on a rooftop, has amassed over 54 million views on Youtube.

Nine years after its release, the track is still near and dear to fans. “If you can’t recite Hot Chelle Rae’s ‘Tonight Tonight’ by heart then I don’t want you,” one fan wrote on Twitter.

Hot Chelle Rae went on to release subsequent EPs with remixes of both “Tonight Tonight” and “I Like It Like That.” Plus, the group’s early success caught the attention of some major names; they went on the tour in support of Taylor Swift and the aforementioned Lovato, before embarking on their own world tour in late 2012.

There would be no follow-up album to Whatever. The band released singles “Hung Up” and “Don’t Say Goodnight” in 2013 and 2014, respectively. The songs saw moderate success. In late 2013, then bass guitarist Ian Keaggy announced his departure from the group, leaving guitarist Nash Overstreet and brothers Ryan and Jamie Follesé as the remaining lineup. The trio released another EP, took it on the road, and opted for a hiatus in 2015 to recharge their batteries.

Now, it appears their batteries are fully recharged. In addition to amping up their presence on TikTok, Overstreet curated an entire playlist for fans to enjoy in quarantine, aptly named “Quarantine & Chill.” The playlist is made up of 18 songs, featuring current hitmakers Ed Sheeran, Lady Gaga, Swae Lee and more, and it serves as another way the group can stay connected with followers during this strange and unique time.

Hot Chelle Rae also hopped on the bandwagon of live-streaming performances, holding a gig from their home studio on May 7. They played a mix of old and new material, and threw in an impromptu cover of “Blinding Lights” by The Weeknd for good measure. The band divulged on their creative process, shared their thoughts on The Weeknd’s new album and provided commentary on the current state of the music industry.

The group’s commitment to staying connected with fans using modern methods such as TikTok isn’t just creative, it’s imperative. While other artists see this time in quarantine as a break, Hot Chelle Rae are doubling down on their social marketing strategy, proving they’re not your stereotypical musicians. And when things eventually return to normal, whenever that may be, Hot Chelle Rae will once again be the hot ticket in town on the concert circuit.