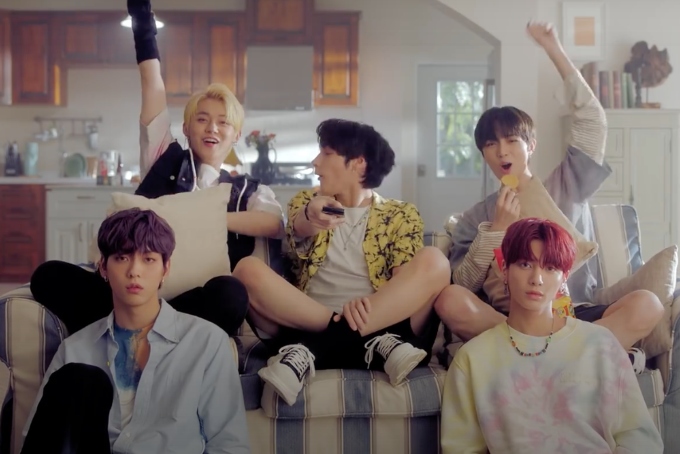 Nearly a year and a half into their debut, Tomorrow X Together, also known as TXT, have gone from acts to watch to mainstays in the pop world. Yeonjun, Soobin, Beomgyu, Taehyun and Huening Kai‘s energetic and youthful personalities have translated effortlessly into their music and performances. The quintet’s new EP, The Dream Chapter: Eternity, is the third and final installment of their Dream Chapter album series.

Up until now, the group has released upbeat pop tracks that show off their versatile vocals and bright rapping styles. Their latest title track “Can’t You See Me” takes on a more mature and mysterious concept, sonically (insert your “bad guy” twisted vocal effects here) and thematically. On their previous Magic album, they explored themes relating to fantasy, freedom, youth and friendship. Naturally, growing up is a part of the process. They don’t hold back on this coming-of-age experience: “Can’t you see me just like that magical day? // Say believe me // Can’t you see me? // Friends don’t understand me anymore.”

The accompanying music video captures their torn feelings all too well. One minute they’re trashing a house with strawberries and tomatoes (totally normal teenage stuff, right?), and the next, casually performing choreography in front of the burning house.

Eternity contains six total tracks, and has the band experimenting with even more genres this time. The opening track, “Drama,” sticks to their familiar bright pop style — think “New Rules.” “Fairy of Shampoo” is a dreamy soundscape that you’d probably hear at an underground, classy jazz club.

“Maze in the Mirror” is an acoustic track that continues to capture the band’s coming-of-age anxieties: “I want to fly now // Like Peter Pan flying forever,” sings Taehyun. Things take a hard turn with the hip-hop and bass-heavy “Puma.”

The ending track, “Eternally,” shows off duality in the best way possible. The band switches gears four times, between tender melodies to a cloud of ominousness.

From sour to sweet and back again, the boys have managed to make it work on the new EP. They might have to worry about friends deserting them, but the fans won’t desert them that easily. Not when they show this much potential.