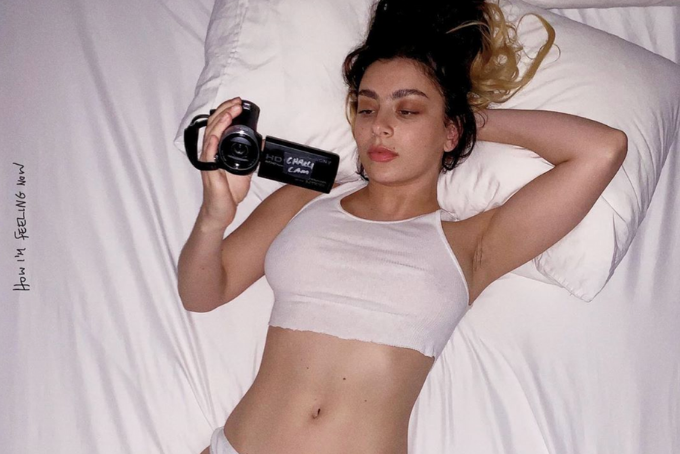 Charli XCX’s quarantine album is here and fans are over the moon. How I’m Feeling Now is a project Charli started once stay-at-home orders went into effect. This album is unique in so many ways and really speaks to the raw feelings of having to stay inside for months on end. Staying connected is so important right now, and the process of making this album brought Charli and her fans closer than ever.

For this project, Charli held Zoom meetings with her fans and did countless Instagram lives to talk about the process. Everything was made online — meaning no studio time — with the help of collaborators all around the world. The pre-album singles, “Forever,” “Claws” and “I Finally Understand,” all had different cover art. The covers were shot by Charli’s boyfriend, Huck Kwong, in their home. Then, Charli asked fans and friends to send their edited artwork to make unique covers for Spotify and Apple Music. The album cover for How I’m Feeling Now, was also shot at home and voted on by fans.

The album is a balanced mix of vulnerability, frustration, longing and reflection. These are all strong emotions that people are experiencing during this crazy, unprecedented time. The first track on the album is titled “Pink Diamond,” a title that was inspired by Jennifer Lopez‘s iconic engagement ring from Ben Affleck. It really has nothing to do with the song, except for Charli thinking it sounded like a cool title. “Pink Diamond” has the most intense production on the album and discusses Charli’s deep desire to go out and party, setting the tone for the rest of the album.

The next track, “Forever,” was the first release from How I’m Feeling Now. This song is extremely sentimental and has a tear-jerking music video made of clips sent in from fans. It evokes a strong emotion of longing for a time where we can all be together again, which is a constant theme throughout the album. The next track is another pre-release and fan-favorite, titled “Claws.” This is simply an upbeat love song, with lyrics that are so fun to sing along to.

In “7 years,” Charli explores a topic she hasn’t really opened up about in her songwriting until recently. This is another love song, but way more vulnerable and honest. It’s about the ups and downs of her seven-year relationship (fans didn’t even realize it has been that long!) with boyfriend Huck Kwong. The vocoder is used heavily throughout the track, emphasizing the emotions in the lyrics. The next track, “Detonate,” continues the love story. It explores the complexity of self-love and its comparison to romantic love from your partner.

The sixth track, “Enemy,” continues discussing the risks of falling in love and elaborates on the well-known phrase, “Keep your friends close, but your enemies closer.” The lyrics consider the possibility that the one you’re in love with — and naturally closest to — could also be your enemy. When talking to Apple Music about the track, Charli said, “I kept thinking about how if you can have someone so close to you, does that mean that one day they could become your biggest enemy? They’d have the most ammunition.” It’s a great track — an enjoyable listen with complex lyrics that anyone can feel a connection to.

Following “Enemy” is “I Finally Understand,” the last pre-album release. This track is about Charli’s relationship with Huck and how quarantine has actually brought them closer together. Lyrically, this might be one of the most honest tracks on the album, with brutal lyrics like, “My therapist said I hate myself really bad.”

The tone of the album shifts at the eighth track, “C.20”, which is a continuation of a song from Charli’s previous self-titled album, titled “Click.” Charli dropped at the end of 2019, which means it’s very fresh in fans’ minds. This continuation is so special because of the complete change in the world since the COVID-19 pandemic started. “Click” is a song about having a badass friend group, and “c.20” is about missing those friends during quarantine. This song is definitely a fan-favorite because you have to know the original song to feel the full effect of this follow-up track.

fav song from #howimfeelingnow ???? comment below 🌱 ps here’s my cover piece from @guardianweekend magazine. go to my story to read the article 💓📜📝 pics by @huckkwong

Charli channels Jay Gatsby in “Party 4 U”, a mellow and seductive track that has been in Charli’s back pocket for quite some time. It wasn’t made completely in quarantine like most of the tracks on How I’m Feeling Now, but it matches the aesthetic completely. At the end of the track, Charli and her collaborators included audio from past live shows to add a level of nostalgia that is needed in a project like “How I’m Feeling Now.

The second to last track, “Anthems,” is the ultimate standout track of the album. Themes of dealing with the isolation of quarantine are littered throughout the album, but “Anthems” addresses it head-on. The production on this song is completely energized and in your face. The lyrics chronicle every emotion, daily activity and coping mechanism Charli is going through in this weird time. The chorus is, appropriately, anthemic with the scream-worthy lyric “I want anthems // Late nights, my friends, New York.” “Anthems” is every yearning feeling you might have for people and places that aren’t accessible during quarantine wrapped up in one song. Most importantly, Charli pens “Finally, when it’s over // We might be even closer.” One day, when concerts are safe to attend, this song will make crowds go crazy.

The last track on How I’m Feeling Now is titled, “Visions.” The most memorable aspect of this song is its outro, which is a blend of club beats and a dreamy production. This closing song is about seeing visions of the past and future, but not being sure of what’s to come. Charli describes it as a “big lucid dream,” which is an appropriate way to end an album centered around this strange time in history.

How I’m Feeling Now will forever encapsulate this time in Charli XCX and her fans’ life. It explores every breakdown, oddity, fear and silver lining of living life in quarantine during a worldwide pandemic. Charli describes it as her most vulnerable work yet, which has meant so much to fans who are also struggling through this unknown reality. Despite all of the craziness and danger in our world, How I’m Feeling Now is a triumph for Charli as an artist and more importantly, as a human being.