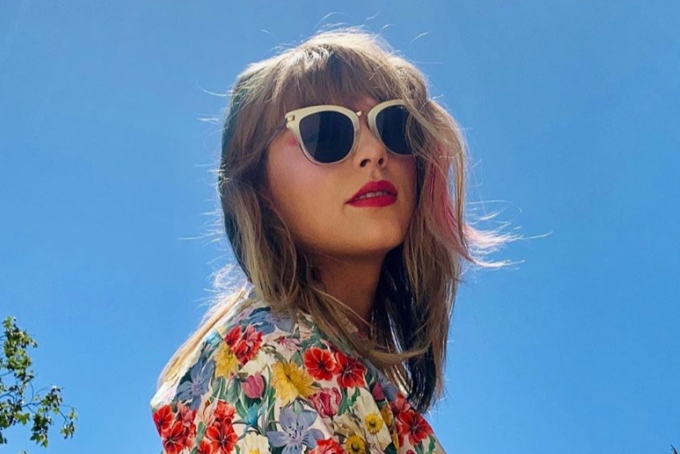 Buckle up, you guys, because Taylor Swift has once again proven that she’s not just a lyrical mastermind, but a mastermind in business, as well. And it all started yesterday, May 24, with an unsuspecting post on the pop star’s Instagram Stories.

Yep! Yesterday, Swift took to Instagram to share the exciting news that a cover of “Look What You Made Me Do” by Jack Leopards & the Dolphin Club would be featured on the new episode of Killing Eve. Funny enough, there’s no record of that band existing at all, and die-hard Swifties were quick to notice.

Who are your favourite underground artists? Mine is this band called Jack Leopards and The Dolphin Club. They're still very unknown but you should check them out!! pic.twitter.com/KJWVNyNnyP

So, what does this all mean? Well, it’s quite complicated unless you’ve been following Swift’s career closely over the last few years, from her ongoing feud with music mogul Scooter Braun to her less-than-cordial split with DJ Calvin Harris in 2016.

As you may remember, Harris released his hit song “This Is What You Came For” the same summer that the two called it quits. But Harris wasn’t the only one who got songwriting credits for hit. Alongside his name was the name “Nils Sjöberg,” which turned out to be a pseudonym for Swift herself.

Welp, it turns out Sjöberg is back, because alongside Jack Antonoff, they were given producer credit for this brand new cover of “Look What You Made Me Do,” which is rumored to have been sung by Swift’s very own brother, Austin Swift.

If you’re wondering why Swift went through such great lengths to drop a cover under her pseudonym and create a fake band, it’s actually quite simple. Ever since Swift’s very pubic spat with Braun, who now owns the masters of her first six albums after a $300 million deal with Big Machine’s Scott Borchetta, the pop star’s been threatening to re-record those albums. This cover was her first foray into that.

Taylor made up a whole band called “Jack Leopards and The Dolphin club” consisting of herself, Austin Swift and Jack Antonoff to cover LWYMMD which is sung by Austin, partly produced by Taylor herself to not let Scooter gain a single cent from the it?

TAYLOR SWIFT IS A GENIUS 🙌 pic.twitter.com/PkMgLFPzIc

By developing a fake band led by her brothers, fans think Swift found a loophole to ensure that Braun doesn’t get any royalties from the cover. And while some might think this move was just too petty, you have to admit: It’s absolutely brilliant.

At the moment, most of this is just speculation, but like you, we’ll be keeping our eyes closely glued to Swift and Braun’s ongoing chess game. After all, you never know what’s going to happen next.