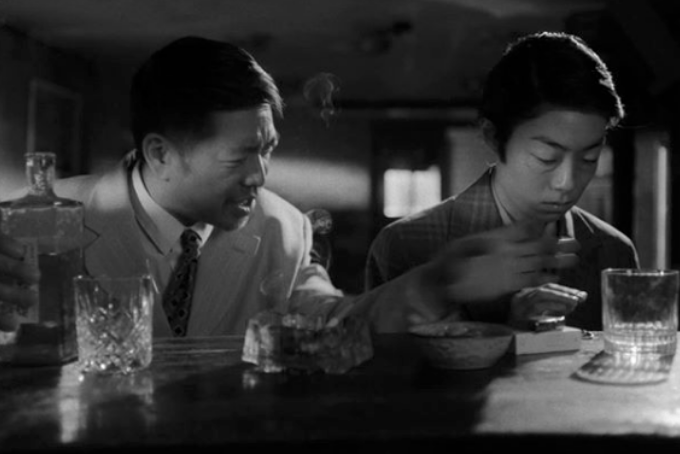 The song is about a friendship that’s over now, with Sawayama mournfully realizing, “I’m so good at crashing in // making sparks and shit but then // I’m a bad friend.” It’s a unique song in that it deals with a friendship instead of a romantic relationship, but that’s what makes the track so special.

The music video was shot in black and white, giving the video a film-noir feel. It was directed by Ali Kurr, who also did the videos for the singer’s tracks “Where U Are,” “STFU” and “XS.”

The video opens with a businessman drinking his sorrows away at the bar, who is actually played by Sawayama. This character is soon joined by a boisterous companion who wants to party. Sawayama’s character initially resists, but soon joins in, and the two new friends get loud. As the night winds down, they both go to leave, but end up getting in a fistfight. It gets pretty intense, with both characters ending up on the floor. As Sawayama’s character repeatedly punches the other man, the camera pulls away to reveal that there is no one there.

the bar fight might have looked easy but bitch DO NOT try this in the pub !

it takes stunt professionals and stunt rehearsals to not get injured !!!! i had the best time with Leon and Jude learning how to "fight" !!!! pic.twitter.com/oo4YGJyi3T

In an interview with DIY, Sawayama said, “We had so much fun making this, as it was my first time doing stunts and being in prosthetic makeup. The song is about the heartbreak of losing a friendship and realising that you were the cause of the breakdown. When you hear the song, this is not the video you imagine – but that’s exactly what we wanted. The music video is a reimagining of the themes in ‘Bad Friend,’ of longing, loss, self-hate and ultimately self-love. Choosing a slow, film noir style focuses all the attention on performance and acting, which was definitely very daunting, but I had so much fun making a video that is so wildly different from my previous videos.”

It’s a powerful video, and while it doesn’t match the music video we might have been imagining, it still encapsulates the main idea of the song: sometimes we create the problems in our lives. Or, as Sawayama puts it, “Maybe I’m a bad friend.”