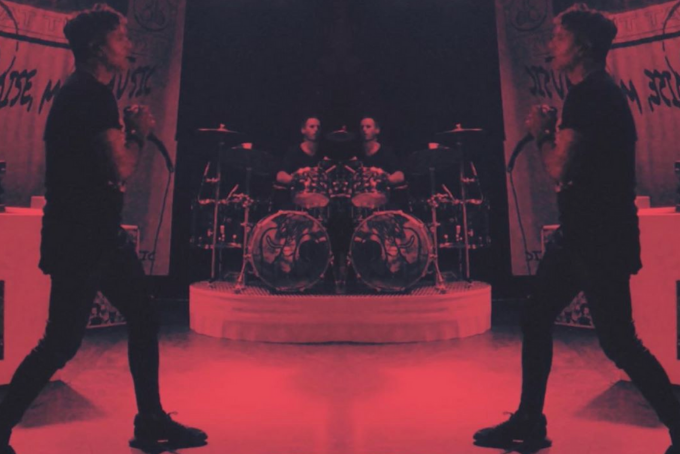 If imitation is really the sincerest form of flattery, then Joy Division should feel very, very flattered. Covering the legendary post-punk group almost feels like a rite of passage for bands on their way to superstardom. In 2007, right as they were blowing up after the release of their unforgettable, critically-acclaimed Sound of Silver, LCD Soundsystem covered Joy Division’s “No Love Lost.” In 2004, right before they became a global sensation with the release of From Under the Cork Tree, Fall Out Boy covered Joy Division’s “Love Will Tear Us Apart.” But even bands who’ve been around the block love covering Joy Division. Enter: Third Eye Blind with their cover of “Disorder.”

When you play the original track and the recent cover side by side, they’re almost carbon copies of one another. The music and the lyrics are pretty much identical and they’re delivered in the same fashion, save for a few subtle but significant creative liberties taken by Third Eye Blind.

The 1979 version of “Disorder” is a dizzying masterpiece, featuring bass, guitar and drums competing for your attention as Ian Curtis sings about his heavy state of being. Although the lyrics are open to wide interpretation, it’s pretty safe to assume that it’s about a man who’s overcome with his emotions. Specifically, he seems to be on a mission to cure his restlessness with a series of chaotic actions. And later, he appears to have some anxiety about his actions. It sounds like a day in the life of a rockstar, but songwriter Curtis was dealing with a number of demons more precarious than love, sex, and rock and roll.

We’ll likely never know what this song was really about and, given its title, maybe we were never supposed to. With “Disorder,” Joy Division created a moving piece of art that’s best enjoyed when you stop trying to figure it out. Yet, for as mysterious as the song is, everything about it makes perfect sense when considering its title. Just as the definition of disorder paints a broad and wild picture, this song is loud yet soft and simple yet complex.

The truly magnificent thing about this song is we’re thrown into Curtis’ shoes, feeling at once what it’s like to be overwhelmed by the chaos of life, before he sings a single word. When he does begin to sing, he delivers the lyrics in his piercing, signature way — mostly monotone and as deep as his voice allows, which is pretty damn deep. The only time his delivery changes is for the track’s emotional conclusion, during which he sings, “Feelings, feelings, feelings,” with urgency.

In contrast, the 2020 version is poppy and upbeat. It practically calls for listeners to live their lives to the fullest. Third Eye Blind’s “Disorder” cover was released on the 40th anniversary of Curtis’ suicide and in the midst of a global pandemic, which may or may not have influenced its positive and joyous interpretation.

Where Curtis pauses to reflect between verses, Third Eye Blind frontman Stephan Jenkins uses these musical interludes as an opportunity to hype up listeners. Before each one, he lets out an enthusiastic, “Yep!” Then, in what can only be described as a true pop-punk move, he vocalizes and hums harmoniously with the instruments before the next verse begins. He’s not quite “whoaing,” as 2000-era scene bands would have, but he gets pretty close.

As the track continues, the music gets more lively and so does his singing. Jenkins has always been a talented vocalist though, and he brings a level of control and skill to this cover. Not only that, but he takes a song with a seemingly heavy subject matter and somehow makes it a catchy bop. But that’s not super surprising, considering he’s built a career out of making music with dark themes to which we all love to sing along. Seriously, only Third Eye Blind could make a song about doing crystal meth so catchy your parents probably still know the words. Jenkins once again flexes this superpower on the “Disorder” cover, turning this track into the carpe diem anthem of the summer.

One could argue that Third Eye Blind aren’t that far off from Joy Division, in terms of their influence on up and coming bands. They, too, have been covered time and time again, and often by bands just beginning to make it big. Hell, when Panic! At the Disco covered “Slow Motion” in 2006, they were touring in support of their explosive debut album, A Fever You Can’t Sweat Out, and they still had all of their original members. And like Joy Division, Third Eye Blind’s music has stood the test of time.

Their five singles from their blockbuster debut album, Blue, still get regular radio play — and not just on classic rock stations. Third Eye Blind have more than earned their stripes as a band with staying power. So, in the case of this cover, this isn’t just a band trying to propel their success by borrowing a song but, rather, an instance of greatness honoring fellow greatness.