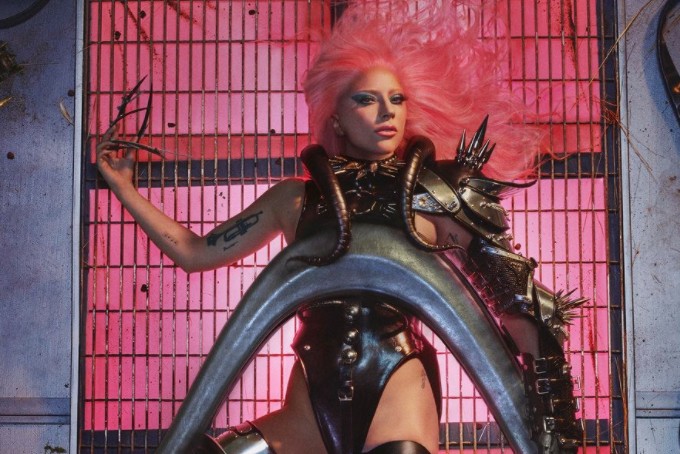 It’s hard not to get excited about the cover of Chromatica, Lady Gaga’s sixth studio album. It features Mother Monster pinned to the wall of a spaceship while wearing impossibly high pointy heels, a bubble gum pink wig and nails so long and sharp they could easily replace any knife set you’ve got. At a passing glance, the cover looks like the Mortal Kombat symbol in human form, and whether the reference is intentional is anyone’s guess. Either way, having a cover that evokes the best ass-kicking video game of all time is perfect for Chromatica, given that it features Gaga as a fierce soldier who’ll stop at nothing to stomp out past flames and any and all bad vibes.

It’s thrilling to see Lady Gaga like this, even if you’re not a gamer or a Little Monster. It’s a bold cover, sure, but she’s an artist who’s best served up bold. Over the last few years, though, Gaga has semi-shelved the weird, in-your-face antics. First, in 2016, she released Joanne, an emotional quasi-country tribute to her late aunt; then, in 2018, she starred in the Oscar-winning film A Star Is Born, for which she snagged Best Original Song for Shallow. However, traces of the freaky and audacious Gaga we’ve come to love and expect still shone through during this period. For instance, there was her historic Coachella set in 2017, which featured a video of her sucking on tentacles as a prelude to her headlining performance. And who could forget her powerhouse Super Bowl LI halftime show, where her inclusion of Born This Way sent a subtle yet strong message to everyone — from viewers to those in positions of power — that we desperately need to be more inclusive and loving toward one another.

Fast forward to 2020 and there’s no question about it: Chromatica marks the return of the bold Lady Gaga. Not only that, but it’s one of her best albums to date.

Chromatica is a truly theatrical album, complete with impeccable orchestral interludes and an all-star supporting cast, including Ariana Grande, Sir Elton John and K-pop sensation BLACKPINK. It’s a complete album, with perfectly organized songs and next-to-no fluff. Each track advances the plot in a unique, captivating and sensical way — well, except for the album’s closer, Babylon. This song is basically Madonna’s Vogue with an ancient history twist. Instead of “Strike a pose,” Gaga gives us, “Strut it out // Walk a mile.” Babylon’s chorus is even sung in the same style that Madonna uses on Vogue. Additionally, some of its lyrics are truly bizarre, even by Gaga standards. She tries to entice us with, “You can serve it to me ancient city style,” but this activity sounds more dusty than sexy. It’s a shame that this track made the final cut because it feels out of place and kills the momentum built by its precursor, 1000 Doves.

Like many tracks on Chromatica, 1000 Doves is an emotional gut-punch that leaves you with goosebumps. Unlike many tracks on Chromatica, it’s a true ballad. Sure, it features a synth-heavy break between choruses, but this song is a slow burn in which Gaga bares her soul. Its lyrics are some of her most personal yet. “I’m not perfect yet, but I’ll keep trying,” she sings out, followed later by, “I cry more than I ever say.” She talks candidly about how people don’t always treat her as a human with feelings because of her superstar status. It’s heartbreaking to think that such a talented and incredible artist could ever be made to feel less than special. However, it’s incredibly powerful to hear her process these emotions in this way. Not only does 1000 Doves grant us a look into her psyche, which we definitely don’t deserve, but it’s one of the best songs on the album.

Gaga also talks about being treated like an object on Plastic Doll. Here, she likens herself to a Barbie doll, asking if she’s, “Your type.” When some artists rely heavily on metaphors in their lyrics, it comes off as clunky and forced. However, when Gaga goes all-in on the metaphor of being a doll in a box, it doesn’t feel gimmicky at all. In fact, it feels genius. On Plastic Doll, she interweaves commentary on the complexity of being a celebrity within a poppy dance anthem — and that’s no easy feat. “I’ve spent too long dancing alone … I’m no toy for a real boy,” she sings, before setting one thing straight: “I’m not your plastic doll.” Not only is this a pretty perfect Gaga track, but it begs for a conceptual video. It’s easy to imagine it: Gaga as a pink-haired doll who breaks free from her box, who then walks stiffly before busting out some insane choreography with her troupe of dancers. But, of course, whatever Gaga comes up with will be a million times better than that.

Gaga also talks about feeling objectified on Fun Tonight, except this time around it’s those closest to her inflicting the pain. “You love the paparazzi, love the fame // Even though it causes me pain,” she sings, bearing her soul. Although the whole album feels deeply personal, the lyrics on Fun Tonight feel rooted in reality — but that’s not what makes it such a powerful song. The power comes from Gaga’s ability to conjure up listeners’ feelings, ones which they’ve likely stored deep down and far away, from staying in relationships that feel like “a prison hell,” as she aptly puts it. It’s a therapeutic listening experience, and by the song’s end, you’re sure of two things: It’s OK to leave situations when you’re no longer having fun, and that no one should make you feel like you’re not good enough. It’s an empowering song that showcases Gaga’s phenomenal vocal range. It starts off soft, with her belting out in the chorus, “Yeah, I can see it in your face // You don’t think I’ve pulled my weight // Maybe it’s time for us to say goodbye.” If this song doesn’t give you goosebumps, you’ve likely never experienced the pain that comes with serious heartbreak — which means you’re also probably a unicorn.

Nearly every track on Chromatica is a success, and its guest features are no exception. On Sour Candy, Gaga pretty much takes a back seat as BLACKPINK goes hard, singing about how women are powerful, sexy creatures that don’t have to take any flack from men. It’s a fun song with a booming beat that’s definitely destined to be the hot girl anthem of the summer. On Rain on Me, Gaga shares the singing duties with pop diva extraordinaire, Ariana Grande. Both of them sing about the strength you gain by working through sadness, defiantly inviting the world to keep bringing it on: “Rain on me!” In the chorus, Gaga unexpectedly goes high and Grande goes low, but together they balance each other out in a delightful way. In Sine From Above, Gaga brings out the legendary Sir Elton John. It’s incredible to see these two superstars collaborate, especially on a song that’s so personal to both of them. In Gaga’s verse, she sings about struggling to find inner strength to power through life’s more trying moments. John’s verse is just as powerful — if not more so. “When I was young, I felt immortal // Not a day went by without a struggle,” he sings. John has had a larger than life existence. He’s the toast of every event, and in his youth, his stage presence could only be described as euphoric. But he was gay during a time when many people deemed homosexuality as wrong, some of whom were his own fans. So although he liberated millions with his music and celebrity, he’s said it wasn’t always easy for him to be his truest self. Courage and fearlessness are two attributes that these artists definitely have in common.

All in all, Chromatica is a truly impressive album. It’s not perfect, by any means, but it’s stacked with powerhouse tracks that both Little Monsters and pop music fans will love, including Stupid Love, 911 and Alice. On Chromatica, Mother Monster takes us on a futuristic ride, one where we see her grapple with self-doubt and open herself back up to love again. Lyrically, it’s magnificent. Musically, it gets a bit samey as the album goes on. However, it allows Gaga to translate extremely painful and personal experiences into songs that are entertaining as hell; and for that, it’s sheer brilliance.

One thought on “Lady Gaga Triumphantly Returns to Her Poppy, Futuristic Roots With Chromatica”