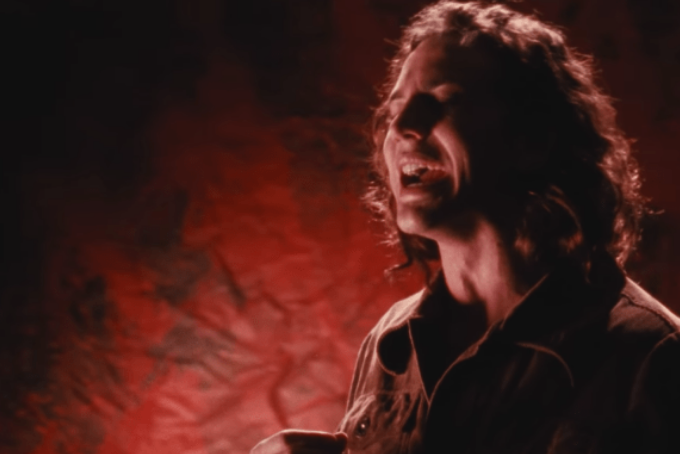 When Pearl Jam released their debut album Ten back in the early 90s, they didn’t earmark “Jeremy” as a single. Despite that, the chilling song inspired two music videos — well three, if you count the unedited version that the band unveiled on National Gun Violence Awareness Day.

Directed by photographer Chris Cuffaro, the first video was a low-budget, basic production that showcased singer Eddie Vedder passionately crooning on a spinning platform. Between shots of him and the band performing, we see a teenage boy exhibiting all the tell-tale signs of restlessness and distress. The song discusses the real-life suicide of Jeremy Wade Delle in 1991, but you’d never pick up on that from this video. Here, we’re given a sepia tale of a troubled kid who becomes fascinated with guns and eventually winds up behind bars.

The song’s inspiration becomes much clearer in the band’s official video for the song. Where the first video was panned by the label and produced with Cuffaro’s own money, according to Kim Neely’s Pearl Jam biography Five against One, this video was fully funded and embraced by the label. As such, director and filmmaker Mark Pellington was able to take the story way further — although it’s a pretty safe assumption that he would’ve made a visionary video even if he had next-to-no resources to do so, given his impressive work with U2, Cage the Elephant and Nine Inch Nails.

From the get-go with Pellington’s video, you know you’re about to witness a tale of violence in suburbia. Clips of newspaper articles cascade in black, red and white across the screen describing school shootings. Then, a series of not-quite-handwritten messages appear, which all seem to mark one specific event: An affluent suburb, 3:30 p.m., 64 degrees and cloudy. It sounds like a typical day; however, it’s anything but.

Shootings in schools, like the one depicted in “Jeremy,” are a massive problem in the United States that can — and do — happen too frequently. When Delle shot himself in front of his class on the morning of January 8, 1991, his peers and local officials never suspected that would happen, according to The Dallas Morning News. It seemed like just another day.

The red flags were there, though. According to an editorial in The Chicago Tribune, Delle had expressed his desire to commit suicide to at least one of his peers, who internalized the cry for help. Delle also left a suicide note. However, he was still able to access a gun, bring it to school and end his life with it. And since that day, gun violence has become an even larger issue in the United States.

“Suicides have long accounted for the majority of U.S. gun deaths,” the Pew Research Center notes, adding that seven out of 10 gun deaths on average in the United States are suicides. In 2019, more than 24,000 suicides were committed with a gun, according to research by the Gun Violence Archive. But gun violence is an epidemic in America that doesn’t start and end with suicide.

The Columbine High School massacre occurred roughly six years after “Jeremy” was released, marking one of the most horrific school shootings in American history. And over the last decade, there have been 180 school shootings in the United States, according to CNN.

One of the reasons why Pearl Jam, after nearly 30 years, decided to release the uncut version of the “Jeremy” music video was to raise awareness for America’s ongoing gun violence issue. “The increase in gun violence since the debut of ‘Jeremy’ is staggering. We have released the uncensored version of the video, which was unavailable in 1992 with TV censorship laws,” the band shared on their Instagram, adding, “We can prevent gun deaths whether mass shootings, deaths of despair, law enforcement or accidental.”

Although the edited version of “Jeremy” won multiple MTV VMAs, including music video of the year, it featured a much different, sanitized ending. Instead of showing Jeremy placing a revolver in his mouth in front of his classmates, the original cut zooms in on Jeremy’s face so tightly that you don’t even see the gun. According to Variety, the original ending confused many viewers, leaving them to believe that Jeremy had shot his classmates instead of committing suicide. Although this ending was still powerful, haunting and celebrated, its censorship distorted its message.

Pearl Jam’s rerelease of “Jeremy” comes right in the midst of a social revolution. Worldwide protests are calling for police reform following the murder of George Floyd. Although Floyd did not die from gun violence, his death reinforces the timely message that Pearl Jam and so many others are trying to drive home: censorship, silence and looking away from disturbing sights only does further damage to our society.

In the words of Will Smith: “Racism is not getting worse, it’s getting filmed.” With racism, gun violence, and really, any social issue, looking away doesn’t solve the problem. And Pearl Jam clearly understands that in order to effect change, we sometimes need to see the things that are unpleasant and allow ourselves to be affected by them.

In addition to the equity protests taking place around the country, today also marks National Wear Orange Day. The increase in gun violence since the debut of “Jeremy” is staggering. We have released the uncensored version of the video which was unavailable in 1992 with TV censorship laws. We have also released an updated Choices shirt with all proceeds to support organizations working to prevent gun violence. We can prevent gun deaths whether mass shootings, deaths of despair, law enforcement, or accidental. Link in stories to watch the uncensored “Jeremy” video.

Even the censored version of the video forced viewers to process a fair share of disturbing sights. We’ve got Vedder looking like a straight-up devil, shaking his head violently while singing in front of red curtains that resemble flames. We’ve got quick flashes of a young boy going through all the different stages of depression, from being outwardly distraught while running through the woods to sinking into himself while coasting through class. We’ve got children doing Nazi salutes in unison in front of the American flag before they’re later splattered in blood. And we’ve got the name of a Bible verse that references original sin and adjectives that describe our troubled leading character: bored, numb, disturb, wicked, problem. But with “Jeremy,” the band wasn’t being controversial for the sake of being controversial. Instead, they were trying to raise awareness for a problem that had been building in our country, one which has only escalated since the video’s release.

By rereleasing this video, Pearl Jam is putting the spotlight square and center on the issue of gun violence in America — but they aren’t stopping there. They’ve also reworked their iconic Choice t-shirt and are donating all of its proceeds to the Vitalogy Foundation, the nonprofit the band started in 2006 to support the prevention of gun violence. The t-shirt, like its original version, features the cover art for the “Jeremy” single; but unlike the original, it has the phrase, “10 out of 10 kids prefer crayons over guns,” written on the back rather than “nine out of 10.” You can purchase the new version of the t-shirt here.

We planned to release a new version of the Choices shirt today as part of Gun Violence Awareness Week to fundraise for frontline organizations working to prevent gun violence. The events of this past week have underscored the importance of this issue and remind us that Black Americans are ten times more likely than white Americans to die by gun homicide. We continue to stand with communities of color and all of those taking actions for racial justice across America. Link in stories.

Over the years, Pearl Jam have earned their stripes as a band that’s deeply rooted in activism and that wants to make the world a safer, better place for all. Releasing their powerful unedited video for “Jeremy” might not transform the world, but it will certainly spark an important conversation about gun violence and force us all to think about the issue. And by deciding to release it amidst everything that’s going on, it just further amplifies how much this band cares about the issues surrounding them and how much of a triumph this video really is. It’s stood the test of time and its message is more relevant than ever. Will it make you uncomfortable? Yes. Should you watch it? Absolutely.