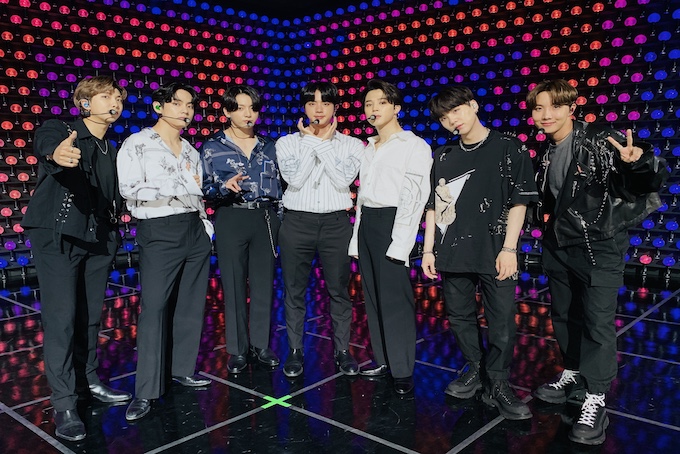 Online concerts may be the present norm, but it’s not a problem if BTS is performing. The K-pop septet held their first virtual concert, titled “Bang Bang Con: The Live,” considered to be the celebration of their seven-year anniversary as a band. According to Variety, 756,000 viewers tuned into the broadcast, which makes it the largest audience for a paid, virtual concert.

BTS captured the hearts of their ARMY, by performing seven years of hits though several rooms and stages, designed like a chill hangout rather a high production gig. After all, everyone is likely watching from the comfort of their own homes (with an ARMY bomb in hand, of course).

The concert kicked off as the members made their entrance from different doors in a brightly colored hallway, smoothly leading the audience to a traditional performance set. They performed their throwback hits, including “Dope” and “Boyz With Fun” — songs we might not have heard during live concerts. The band then introduced themselves to fans in a modern lounge area room, complete with comfy sofas and fun mementos in the background. They got together on this set throughout the show, to hang out and interact with fans.

In the next portion, the band debuted unit tracks from their Map of the Soul album series. J-Hope, Jungkook and Jin sang their emotional hit “Jamais Vu.”

Next, RM and SUGA threw it back with their old-school rap anthem, “Respect.” They were dressed in suits that SUGA says gave them a paternal feel. The outfits and unique choreography were certainly a highlight of the broadcast.

Lastly, best buds Jimin and V performed their soulmate anthem, “Friends.” They joked about their cheeky “mandu” or dumpling incident, and compared their pinky fingers, which devout fans are all too familiar with by now.

In-between sets, during another lounge session, a sweet moment occurred when J-Hope gave out his personally-made friendship bracelets to his bandmates. They then launched into abbreviated versions of their Map of the Soul: 7 tracks, “UGH” and “00:00 (Zero O’Clock).”

V noted that fans might be sad that they only performed snippets of the two tracks, but later made it up with the tour performance of their single “Black Swan.” A LED, umbrella-filled performance of “Boy With Luv” followed. Fans may have noticed the multitude of ARMY bombs built into the set during this fun performance.

The encore set followed with the hyped up “Go Go” and “Anpanman.”

Before ending with the final song of the night, each of the band members shared their feelings on the concert and current situation.

“It was hard for me to perform,” admits RM. “It’s scary to think that maybe this could be the future of concerts.”

However, moments like BTS giving each other a group hug and making sure to leave space for ARMY are part of the charm and endearment that the band are still able to bring to fans in this new reality. They finished with the introspective “Spring Day,” and although RM may have closed the purple doors on us, they’ve assured us that this won’t be the last time we see them.

Until next time, boys.