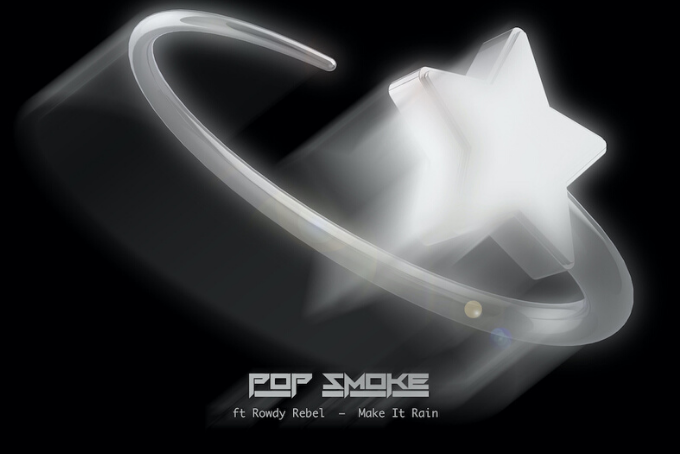 Posthumous music releases are a tumultuous topic, and the discussion continues with Pop Smoke‘s new single, “Make It Rain,” which was released by the late rapper’s estate on Friday, June 12. The first single off the Brooklyn native’s debut album Shoot for the Stars, Aim for the Moon was released on the day said album was slated to arrive. The decision was made after the murder of George Floyd to push the album release to July 3, “out of respect for the [Black Lives Matter] movement,” said Smoke’s manager, Steven Victor in a statement on Instagram.

Music is the tool of revolution. We have been watching, along with the rest of the world, as long overdue change starts to take root. We have seen Pop’s music become the soundtrack of the moment, unifying the masses. Given recent events, we have decided to delay the release of his album out of respect for the movement. “Make It Rain” will be released this Friday, June 12th. The album will be released on July 3rd. Please join us in celebrating Pop Smoke’s legacy. 💫💫💫.

Smoke was just 20 years old when he was shot and killed during a home invasion in the Hollywood Hills in February 2020, just days after the release of his sophomore mixtape, Meet The Woo 2</em<. His rise was swift, and his music lives on at Black Lives Matter protests in New York City, as his lone platinum single “Dior” serves as a rally cry for the Movement in this fight for racial justice.

Never forget that the NYPD targeted Pop Smoke & prevented him from performing at the Rolling Loud Festival & in Brooklyn. To sing his songs at the top of our lungs at BLM protests is an act of resistance for nyc kids, specifically for black kids.

The track is Smoke’s posthumous debut and sticks to his foundational roots of jaunty hip-hop with an infectious, hammering beat underscored by deep, booming vocals. His voice is idiosyncratic — distinct to the point of unmistakability. Even as he has passed on, he remains a stalwart in the crowded theatre that is the present day music industry.

The track is fully on brand with Smoke’s sound, which points to the track being completed by the artist before his passing. It’s commonplace for posthumous releases to mark a decline in quality, but such is not the case with “Make It Rain.”

i promise ya I’m crying listening to this rn. He really not here w us…. RIP BIG POPPA. YOUNG LEGEND IN THE MAKING AND IT WAS TAKEN TOO SOON FROM YOU. https://t.co/EOPlkmYmtE

The track features a verse delivered via “prepaid collect call” from incarcerated GS9 rapper Rowdy Rebel, who is serving time for conspiracy to commit murder, for which he pleaded guilty for in 2014. Set to be conditionally released from prison at the end of this year, Rebel is slated for a parole hearing in August 2020.

Four days after the track was released, it was announced that the Estate of Pop Smoke reached a worldwide publishing with Warner Chappell Music, which includes all content prior to his passing, as well as his aforementioned forthcoming debut album.

“Make It Rain” captivated Smoke’s audience who was desperate for content in the wake of his death. It’s been a long couple of months, and it’s certainly nice to hear the familiar, ornery tones of Pop Smoke — the narrator we didn’t know we needed.