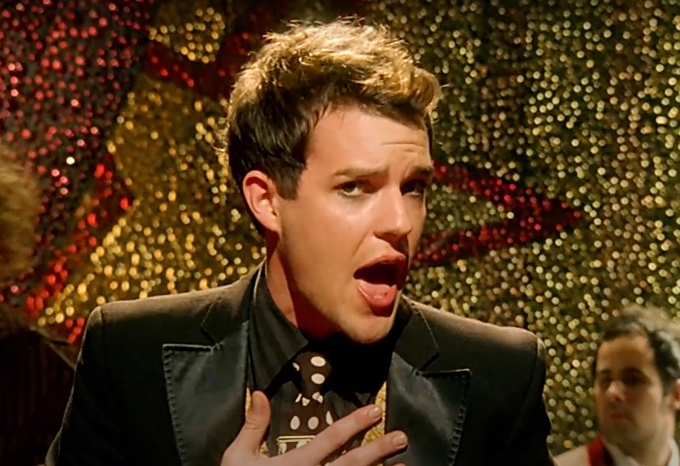 Brandon Flowers has been blessing our eyes and ears since The Killers‘ Hot Fuss debuted in 2004. Now, the band’s frontman is turning 39 this Sunday, June 21. Some may say he’s a true gemini with his two personalities: The Man and Mr. Brightside. Either way, he has an undeniable energy on stage and in the group’s music videos. Brandon is a pro when it comes to alternative music, paving the way for future generations. And with all The Killers’ (and Brandon’s) iconic moments, we thought we’d celebrate the Las Vegas crooner’s birthday with his most memorable music videos. (And yes, it was hard to pick just 9.)

Already, we’re off to a great start. For “Here With Me,” The Killers enlisted some help from Tim Burton, meaning it came with some very spooky vibes. In the video, Brandon and the boys perform this ballad softly in a theater. Meanwhile, actor Craig Roberts is going on dates with a wax figure version of Winona Ryder. This love song is shown in a quirky way, but we can’t help but feel invested.

“All These Things That I’ve Done” is the definition of a classic — not only as a single, but in music video form, too. In it, Flowers is sporting a mustache, guy-liner, and full cowboy attire. This black-and-white video is full of fun styles, characters, and symbolism. Not to mention, Flowers rides a donkey in it, so there’s that.

The “Shot At the Night” is beautifully filmed with a heartwarming story. In it, fans get a behind-the-scenes look at the band’s hometown, Las Vegas, from the eyes of a casino housekeeper. The young woman is then swept away from her job to go on a magical night out with a cute boy. Meanwhile, Flowers sings this amazing song from a high-rise building. The reflection of the Vegas lights below only adds to the dream-like quality of the video.

Although The Killers have too many amazing videos to count, we did have to make room for something from Flowers’ solo project. “Crossfire” is from the singer’s first solo album, and its music video shows a reversal of classic gender roles, where Flowers is the damsel in distress whom is repeatedly saved by actress Charlize Theron. The two make a great duo; Theron graciously fights off ninjas only to have Flowers sheepishly smile every time he gets rescued.

“When You Were Young” proves that The Killers have always had a knack for storytelling. Not only does the video and band fit aesthetically into the Sam’s Town era, but the way it’s done is simply amazing. The video is shown in reverse order of how the story actually took place. Filmed in a beautiful city in Mexico, the video depicts a new girl in town who falls for a man, but is cheated on. However, we see her getting cheated on at the beginning and watch her love story unfold backwards. Meanwhile, The Killers are performing in a restaurant the girl was working at. It’s truly incredible.

“Just Another Girl” was released as part of The Killers’ greatest hits album — and the music video, as well, pays homage to the band’s best work. Former Glee star Dianna Agron plays the role of Flowers and even sports a fake mustache to mimic certain eras of the band. The Killers are good sports when it comes to parodying themselves. Plus, we even get a side-by-side of Dianna and Brandon both dressed as Brandon. The attention to detail in this video is impeccable.

We obviously can’t celebrate Brandon Flowers without showing what might be one of the most iconic music videos of the 2000s. “Mr. Brightside” is one of the most recognizable songs, and so is the corresponding video. Who could forget the guy-liner and over-the-top burlesque costumes? Flowers also gets himself involved in a love triangle and later breaks out into dance. This video shows the band’s (and specifically Flowers’) theatricality, and we’re still living for it all these years later.

On the opposite side of “Mr. Brightside” we have “The Man.” This is another video where Flowers parodies himself. The entire song is about how the singer saw himself when he was younger, cocky, and had nothing to lose. Now, he acknowledges his past and is a bit more soft-spoken. However, he still brings that bold energy to the stage while poking fun at his past self. We get that in this video as he shows up in shiny outfits, flexing, and strutting his stuff. Seeing Brandon Flowers’ play a douchey version of himself might be the funniest thing ever.

Welp, we made it to the most memorable video. “Read My Mind” tops our list, and even Flowers himself has said that this is his favorite song of theirs. From the opening shot of the crooner standing in the middle of a crowded street in Japan, you can feel the intense emotion. The video also shows the band goofing off around the city, but we do get a sense of “I say I’m fine, but I’m really not.” We also get to see a lot of the blending of cultures. And whether you choose to see the fun or the emotional side of this video, it’s an unforgettable one that will stick with us for years to come.