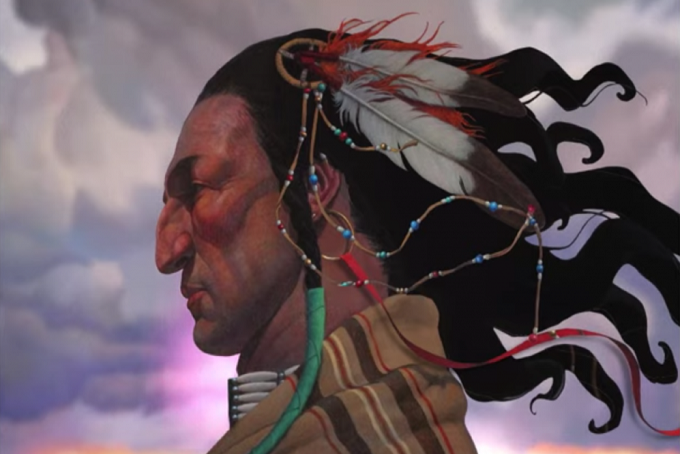 On June 17, The Killers released “My Own Soul’s Warning,” the third single off their upcoming album, Imploding the Mirage. The album was set to release on May 29, but the band decided to delay it; however, they have not revealed a new date for the album’s release yet.

The single’s artwork is a painting by Thomas Blackshear, the same artist who painted the covers for previous singles, “Caution” and “Fire In Bone,” and it features a member of the Crow tribe of Native Americans, who allowed the use of the painting. Tribal leaders wrote a letter, stating the following: “Artists living across the world inspired by our people and way of life, is a total honor and true testament of the knowledge our people share. During this unprecedented time due to the COVID-19 Pandemic as well as the injustice of police brutality protests around the world. Our people recognize the need to also help keep our spirits positive.”

Just like The Killers’ 2004 and 2017 songs “All These Things That I’ve Done” and “The Calling,” “My Own Soul’s Warning” touches on the topic of religion. The track alludes to frontman Brandon Flowers’ struggles with faith. The first two lines of the song are “I tried going against my own soul’s warning // But in the end, something just didn’t feel right.” Clearly, Flowers describes how, at some point in his life, he strayed away from God and this decision made him feel devoid of something.

In a 2018 interview with CBS News, Flowers talked about the importance of his Mormon faith for him. He said that he goes to church not just because he has nothing better to do on Sundays, but because he truly believes in it. He also stated, “I don’t know what my life would be like without [church]. I think I would have been a casualty of rock ‘n’ roll.” Nevertheless, like any other human, Brandon had his fair share of doubts when it came to his beliefs.

The chorus in “My Own Soul’s Warning” goes “But then I thought I could fly // And when I hit the ground // It made a messed-up sound.” These lyrics reflect upon the damage the singer suffered after trying to live his life apart from God. Although he was doing what he wanted to do, Flowers’ ubiquitous feeling that something was wrong made him return to his faith and to God: “And it got me thinking, no matter how far // I just wanted to get back to where you are.”

You can listen to “My Own Soul’s Warning” below:

Once again, The Killers treated us to a great song, and we are sure that the whole Imploding the Mirage album will be incredible. You can pre-order the album on the band’s official website.