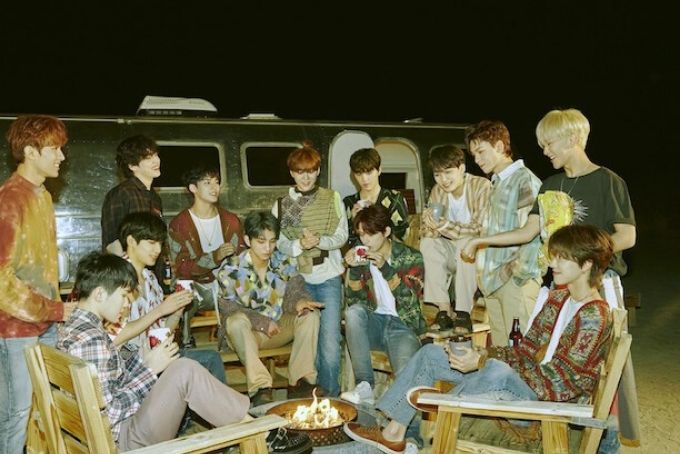 Seventeen and their fans, known as Carats, recently celebrated the group’s five-year anniversary. The band has now released their seventh EP, Heng:garæ. Life is filled with decisions — some require more thought than others, but nevertheless, it’s easy to lose your way. As all 13 members are now in their early to mid-twenties, Heng:garæ focuses on youth, positivity and healing.

The upbeat and funky title track “Left and Right” marks a slight return to the brighter music of their earlier days. It’s a stark departure from last year’s An Ode, which focused on darker, mature concepts. The song acknowledges that while life feels like a race sometimes, it’s also a reminder that there will be others by your side to help you along the way. Seventeen is basically telling you to chill out in the best way they can — with a cool, summer bop. The chorus might just be their most addictive yet.

The quirky and colorful music video is nothing but a good time. The members chill out in different places, such as a track field, rooftops and empty parking lots. The set is filled with dozens of street signs, easily signifying all the different directions one can take. The choreography is definitely a fun one and TikTok-worthy.

In the ending scene, S.Coups is in a car that’s launched like a rocketship, as the members look on. There’s a fiery crash, but he manages to remain unscathed and breaks into dance. It’s an eccentric scene, but also Seventeen’s charismatic way of reminding us that things will be fine.

Heng:garæ contains six tracks and all are inspirational and uplifting. As usual, all tracks are produced and written by member Woozi and the team’s in-house producer Bumzu. Members S.Coups, Hoshi, Mingyu, Wonwoo and Vernon are featured as co-writers as well.

“Fearless” is a powerful opener to the album, with its dramatic production and chant-filled chorus. Going from “Fear” to “Fearless,” the track features the haunting lyrics sung by Joshua on their former title track. “I know nothing is forever, but I still can’t let go,” sings Jeonghan this time.

Although it’s a bit of a heart-breaking song, we could listen to the jazzy “I Wish” all night long. It radiates calming vibes and everyone’s vocals are delightful.

The previously released “My My” is a track with the same youthful concept and message of reassurance as “Left and Right.” It’s a little calmer this time around, but just as special. “No need to rush // You’re doing fine // Just stay as you are // My journey starts with me,” The8 sings.

“Kidult” brings about a flurry of emotions as the melodies are superior and the lyrics are just too relatable. “Together” is the last bit of encouragement and a perfect conclusion to Seventeen’s journey of youth.

If you’re ever having any doubts or worries or just looking for that perfect summertime soundtrack, Seventeen’s Heng:garæ is the album for you. The band continues to break records, as they’ve never lost authenticity with themselves and within their music.